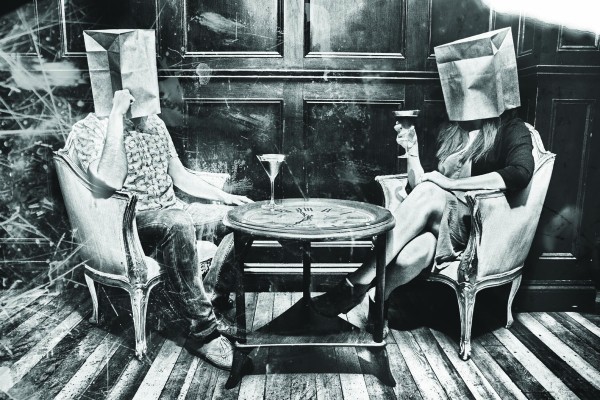 Love is Blind | Laura and James

I was three Smirnoffs down by the time I reached Ombrello’s. It was freezing but, in true blind date fashion, I had my tits out because sometimes a girl’s gotta work her best assets.

I was escorted to my table by a cute waiter. He had the kind of ass that made me not want to walk straight for days. Things were looking up.

However, I was not impressed by my date. First thing to say, is that I swear I’ve seen him before, like one of those nerds you always see studying in the library. Like I don’t know him, but you also totally know him, you know? My date’s ass was as flat as his personality. He was wearing glasses, but I swear he didn’t fucking need them. I think he just thought they looked cool (they didn’t).

He said he was studying a BA in English and started talking some shit about Keats. I asked him what his favourite Keats poem was, but he couldn’t remember the name. I drank some wine. He never asked me what I studied.

BUT THEN he asked if my boobs were fake. What the fuck?? He actually said that. I said no, and he said they were wonderful. I used the awkwardness to excuse myself to go to the bathroom.

In there I snapchatted friends for help, then dragged myself back to the table. We talked some more shit about whatever the fuck he did, honestly, it’s kind of a blur at this point. I decided to escape. We hugged, he held on for just a microsecond too long, pressing his chest against mine. I immediately went to 10Bar and scored with a guy that actually asked me what I was studying. It’s dentistry, thanks for asking.

I am not a regular in the Dunedin dating scene, because most girls these days aren’t my type. I prefer to buy them dinner and talk to them about politics and philosophy, rather than watch them stumble out of a club.

However, my flatmates encouraged me to sign up to Critic blind date - I don’t consider myself desperate enough to do it otherwise. Anyway, a week later, I found myself at Ombrellos. To my fellow craft beer drinkers out there, I engaged in a cheeky Bird Dog before doing the deed.

I arrived fashionably early, and, was greeted by a smiling brunette. Her nose was too big, and her teeth too crooked. However, she had a warm smile and big, beautiful breasts. Overall, she was a 6/10, maybe a 7 with less makeup.

She seemed really interested in what I study, to my chagrin, as I hate talking about myself. However, we found a common interest in the poet John Keats, whom I had recently done an essay about, so conversation flowed naturally. I was worried that she was drinking too much, though. Seeming drunk, she went to the bathroom, so I poured out a little bit of her wine - I didn’t want her to get sloppy.

Then, we talked a bit about my childhood and my hobbies. Despite my initial reservations about her appearance, she was growing on me.

Afterwards, we hugged outside the restaurant, though I said quite clearly to her that I don’t kiss on the first date, as I didn’t want her to get her hopes up. Overall, thanks to Critic and my date, I hope we manage to go to that poetry slam sometime soon.