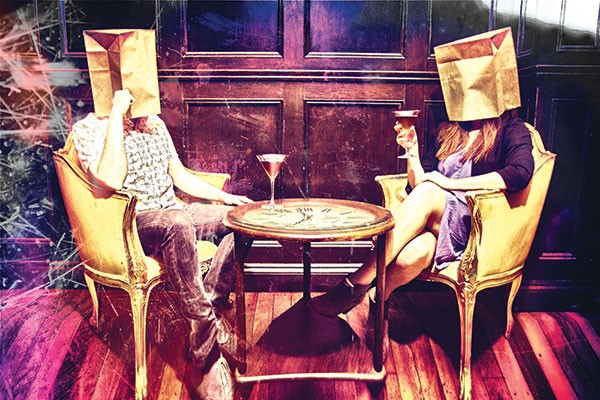 He’s one of two males accidently sent on the same date. Silly Critic, but yay for a change from the usual routine.

Well Critic you certainly made my night interesting, kudos for the company. I started with a few pre drinks with some of the boys from my College then turned up to find no sign of my date.

Lo and behold another guy walks in and it all looks a bit strange I thought maybe you’d gone and done the right thing and given an openly gay male another guy to hang out with for the evening but eventually our girl walks in.

The two of us had been told we’d have to fight for her but it just ended up being a pleasant three way conversation with several drinks and decent food.  With the tab empty we went on to the next bar. By the end of our rounds there I was noticing the tension between the other two. I’d  well a truly given up possibility of playing the straight card for the night and maybe getting some experience on the other team. By this point in the night and as we were leaving, the other guy said he’d left his jacket behind so he searched the bar we’d  just well the girl went back de lusso. I waited awkwardly on the footpath for a while eventually investigating Di Lusso again where the other guy promptly told me the girl had gapped and so that was the end of the night.

So sorry folks I didn’t get my chance but I suspect she was hiding in the toilet just waiting for the other guy to get rid of me. Hope you guys had fun and thanks for the good chat well it lasted.

He’s the second guy sent on the same date. Whoops! From this story though, it looks like he came out as number one.

So I just had a celebratory, end of the day big ol chop hit of the droppie....when Critic unexpectedly called me, great timing. I hauled my stoned ass into the shower, spruced up, shaved and rocked up at Di lusso just on time.

I heard some had found love at the Blind date, others a good lay. I found Napoleon Dynamite’s doppelganger and his two-man posse of a support crew.  What the fuck was going on! This was fast turning into a very hectic situation i was totally unprepared for in my scorched state.

The rules had changed due to a stuff-up in scheduling; we were told this would now be a 3way blind date with the lady on her way. I wasn’t too fussed, my bank account is empty and free food and drink was still on offer.

Our date arrived and I started chopping drinks while Dynamite unloaded a torrent shyte chat, Listening to them rounding off mutual friends they had in common I was bored. With the help of booze and an unreal platter of nibbles, we managed to generate some banter and got the evening moving along more smoothly when out of no where Dynamite announced he is openly gay and aspires to be a priest. So crackup, how did I end up blazed and drunk on a date with a chick and a gay dude?

Dynamite was totally rinsed; he could hardly talk and looked like he was going to spit back up that platter at any moment. So when our date disappeared to the toilet I took the opportunity to send him on his way. Good on ya mate, have a good one.

I knew that after everything that had happened tonight, in order to maintain my position as the alpha dawg in our household/save some face I had to bring the girl home with me.

The night ended with a good ol’ truck and trailer while my flatmate slept peacefully 10 feet away.

Cheers to Critic and Luke the bartender at Di Lusso for a crackup night.