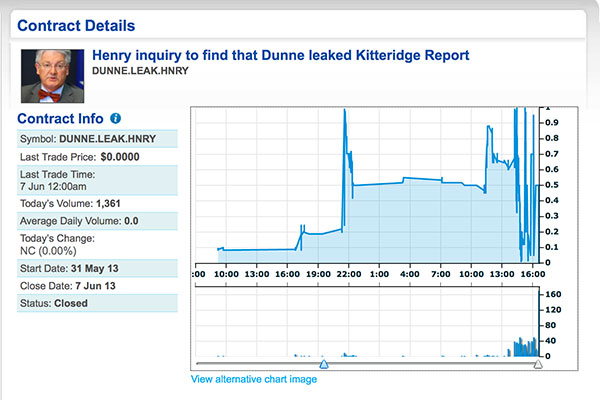 IPredict.co.nz, the New Zealand news-based stock market, is particularly notable for its explicit endorsement of insider trading, which is illegal in the “real” stock market. This lies behind iPredict’s amazing track record: it’s more accurate than most professional political polling companies.

However, the exalted insider trading aspect of iPredict is exactly what makes it liable to hilarious market manipulation. This is exactly what I did to Peter Dunne’s stock immediately before the fallout of the Henry Inquiry (the inquiry that led to Dunne’s resignation as Minister).

Here is how to gain maximum LOL per dollar invested in iPredict:

2. Identify a secondary stock that would provide a logical explanation for a big move in the primary stock, e.g. “Peter Dunne more likely than not to be found the source of the GCSB leaks by the Henry Inquiry.”

3. Watch the primary stock for any strong movement, which could indicate betting by real insider traders.

4. Place a well-timed bet on the secondary stock to give a further appearance of insider trading and make the observer put two and two together in their mind.

5. Watch as greed and fear drive relatively massive speculation and people spread the idea you implanted (or at least take the idea seriously).

A bet on the secondary stock does not even need to be particularly large because they are traded in such low numbers. The $60 I put on the Henry Inquiry’s findings resulted in some 1,361 stocks being traded that day, when the average had previously been fewer than five.

My small bet resulted in the iPredict website crashing several times from increased traffic, a Stuff.co.nz news article specifically about the stock movement and dozens of re-Tweets by well-followed politicians and pundits. You can’t buy that sort of press impact anywhere else so cheaply. The fact that my hunch about Dunne turned out to be correct when the actual report came out was an added bonus.