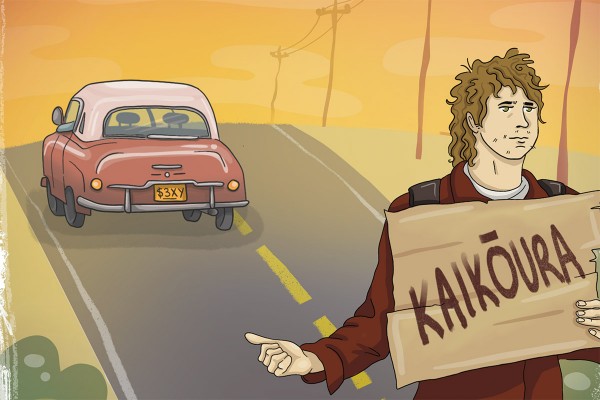 Tales from the Road: A Hitch-Hiker’s Guide to Hitch-Hiking

Hitchhiking is a noble art. To immerse myself in the hitchhiking spirit — putting Jack Kerouac’s dilapidated shoes on my feet and Arthur Dent’s soggy towel round my waist — a friend and I took to the South Island roads with our heads held high and our thumbs turgid. Our mission: to hitchhike from Christchurch to Kaikoura, and find out what hitchhiking in Aotearoa is really like.

Exhausted after a weekend in Dunedin spent singing, hiking, skinny dipping and dancing round bonfires, we stood on the side of the road heading north from Christchurch. Sand trickled from our pockets, our Warehouse-cardboard signs drooped and were more or less unreadable, but we didn’t have to wait long. In under ten minutes we were picked up by a bearded Otago master’s student, who told us he was mainly just “studying mushrooms”. He asked us to mind the bong as we climbed in his disorderly little van.

We drove for 15 minutes before realising he was turning off towards Nelson, and we were reunited with the side of the road almost as quickly as we’d left it. Our next lift arrived in under ten minutes again, a young woman working in the Kaikoura tourism industry. Travelling by herself, she took the precaution of checking our IDs and before long we were off, finding a shared enthusiasm for the Shrek soundtracks. One dragon-donkey romance and a swampy love affair later, we arrived in Kaikoura and said our goodbyes. We walked away feeling our expectations had been far surpassed.

This is not how the world perceives hitchhiking.

Hitchhiking, in its depictions on screen, has become a symbol of danger — it’s a great way to introduce a sadistic murderer on film. It provides a cheap plot mechanic for having stranger-meet-murderer, before murderer, slices / chops / severs / strangles / explodes stranger. There’s The Hitcher, Road Games, Wolf Creek, Dead End — the list goes on. Watch one and you get the idea: anyone who hitchhikes, or conversely, anyone who picks up hitchhikers, has around a 50/50 chance of being a monstrous, murderous maniac. This perception is backed up by real-world examples, too.

Hitchhiking murders in New Zealand include Jennifer Beard, in 1969, and Mona Blades, in 1975. These are cases which have gone unsolved for decades. Countless other examples exist overseas. The stigma around hitchhiking has led to its illegality in a catalogue of states around the world. Locally, the New Zealand police discourage visitors from overseas from hitchhiking. There are, however, locations where hitchhiking is not only legal, but outright encouraged, like Cuba. Hitchwiki, an online guide to international hitchhiking, claims that in Cuba “there may be more hitchhikers than cars. Private cars are very rare and consequently almost everyone hitchhikes. You will see hitchhikers at nearly every crossing, bridge or highway junction.” Picking up hitchhikers is mandatory for Cuban government vehicles with spare seats.

New Zealand, too, is surprisingly popular for hitchhikers. Despite any stigma, many do not consider hitchhiking in New Zealand to be dangerous and Hitchwiki calls it “an extremely easy country for hitchhiking” where hitchhiking is “legal and comparatively safe”.  Helping the hitchers are the tips littered across hitchhiking websites to limit the possibility of getting made into a shitty horror movie remake of your tragic death: travel in pairs (especially if you’re a woman), get a read on the driver before hopping in (i.e. if you catch a full-moon-blood-thirsty-lunatic vibe, walk on), and when you find a suitable ride text the vehicle’s registration to a friend and make it clear to the driver you’re doing so.

Even if hitchhiking is safe, is it worth it, especially when there are at least seven more convenient options? Dunedin hitchhiker Louis Freeman has been getting his thumb out for strangers on a regular basis for five years. He argues that hitchhiking is one of the only ways to meet people outside your own bubble and “it really makes you realise how little you see of hundreds of different parts of society.” Louis adds that hitchhiking builds your social skills as you have to learn to listen and interact with all kinds of people.

Dunedin’s own mayor is known for his hitchhiking tendencies too. While he was a councillor, Mayor Hawkins told Stuff that hitchhiking was great for “getting fairly honest feedback from people you wouldn’t necessarily get turning up to make submissions on the annual plan, or resource consent decisions.”

A 2001 study by sociologists Graeme Chesters and David Smith provides evidence for these ideas, concluding that hitchhiking promotes sociability and cooperation. This is in addition to the environmental benefits, as a notably carbon neutral way to travel that Louis describes as “an act of rebellion against excess.”

The fact remains that the loudest praises for hitchhiking come from white men, and they don’t face the same safety barriers that many other people do. It’s simply not as easy or safe for a woman or a person of colour to comfortably get a ride with someone they have never met. This problem isn’t endemic to hitchhiking though, and it will take systemic and societal changes until it is even close to perfect.

For Louis, hitchhiking is ultimately about getting up in the morning and not knowing who you’re going to meet or where you’re going to end up sleeping. He once hitched with a couple who invited him to stay at their house, cooked a delicious meal, and played board games with him. Another time he hitched a lift from a woman in Spain who was tremendously excited and bought him a vegan breakfast in a tiny village which Louis suspects never saw tourists. Closer to home, Louis and a friend once hitchhiked with a guy who ran an organ pipe museum from a church in a tiny town an hour north of Dunedin.

From a German couple who spoke no English to a miner who hadn’t seen sunlight in a month, getting picked up by people from all walks of life means hitchhikers like Louis are rich in memorable experiences and connections. To anyone who can, I couldn’t recommend it more.