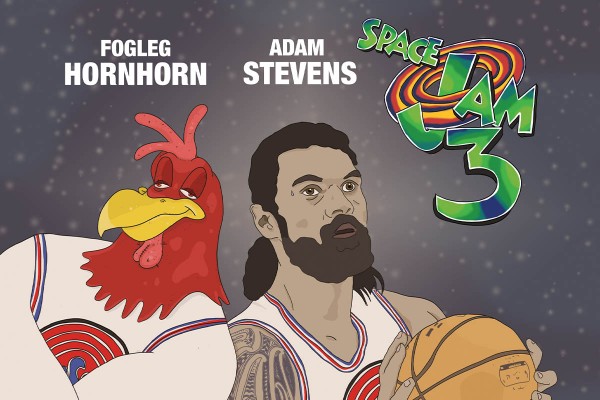 How to Pretend You Know Basketball

A beginner’s guide to “🅱️ Ball”

If an all-powerful alien entity approached Earth, and in a moment of mercy they allow us a chance to earn our intergalactic freedom via a game of our choice, that choice would undoubtedly be basketball. They’ve even made a fucking film about it, Space Jam, starring real aliens and the single greatest player of basketball (Michael Jordan), almost as if to warn aliens that we love basketball so much, we would use it to fucking obliterate any living species in the Universe. Humankind is born with a natural affinity to adore and worship basketball. It's just that simple.

Uh oh, did you manage to be born without this love of the B-Ball? Did you hear about the Otago Nuggets’ big win and realise you had no idea what any of it meant? It happens … to nerds! Read this guide, and become one with the net, hoop and balls, and we’ll have you fluent in the ‘Language of the Dunk’ in no time.

Well, unlike New Zealand’s official language, rugby, basketball is way, way, way more popular internationally. So here is the goss on how to give a toss about the various types of basketball.

Firstly, up the fucken Nuggets. The ‘Otago Nuggets’ are named after that period in history when Otago was huge for mining gold, but now the only gold around is on their necks. They are the current champions of the 2020 National Basketball League. These golden lads are nothing but the best -  they shanked the Manawatu Jets 79-77 to win their maiden championship, after six years of not even being in the game.

Your new favourite local player: Richie Rodger, with a name like a 1970s comic book superhero, you can’t go wrong.

America gets so much shit wrong (race equality, pandemic response, Game of Thrones season 7 & 8, politics, etc.,) but the one thing they got right was basketball. Their national basketball association (NBA) was the first to host a big tournament; this skyrocketed the NBA as being the basketball authority of the world, and attracts the world's best players. The NBA is often what people are referring to as ‘basketball’ as in ‘want to watch some basketball?’, chances are your mate means the American teams playing.

Your new favourite NBA Player: Steven Adams, the New Zealander who went over and joined the Oklahoma City Thunder in the States. A real inspiration, he has a heart of gold, with ‘kia kaha’ printed on his singlet - but he could absolutely one-outs anyone on the planet - or alien for that matter.

Here’s a tip. If you want the good shit bro, have the purest shit. Olympic basketball is bloody funny to watch. The countries literally get their best players and fucking throw em at each other. It’s what politics should be, no bullshit, just pure talent and dunking.

The classic Olympics yarn: “Nothing will beat the Dream Team.” The 1992 American Olympic basketball team was so overpowered, having the 15 best players on the planet in one team. In my humble opinion (and now your opinion, if you want to pretend like you know basketball) the team could have been even better, had Shaq made it in instead of Laettner.

There’s only five main characters in this show, really easy to watch. The five positions are a key component to faking your big basketball brain (BBB).

The fastest dude on the court, he will have the most assists and will try their best to set up cool shots and points. Also known as “the one”, just like that beezy from the Subs toilet line.

Essential yarn to spin: “Wow, their ‘one’ is putting in a shift”; “How humble is their point guard”; “Good pass.”

Also known as “the two”, this geezer is the best at shooting “threes” (as in 3-pointers), getting the ball in the hoop from a far distance. After the passing of Kobe Bryant, an icon in the sport and a great man, it is now illegal to shoot a three without saying “Kobe” (pronounced koh-bee).

Also known as “the three”, but not the ‘a three’, ‘the three’ is the third position.
So many numbers to remember - it would make Judith Collins sweat. The small forward is the most versatile person on the court, and is often strong, fast, good at beer pong and texting you and your mate at the same time. Often the “star” of the team, be sure to remember to have this guide at the ready watching NBA.

The second most powerful player, the “Power Forward” or “four”, is like a freelance unit. Willing to nab the ball and go out on his own to score points, he isn’t as restricted to using his size to generate opportunities for his teammates, unlike his nicer big brother the center or “five”. Power forwards are usually pretty cool, but they’re usually the stereotypical frat boy fuckwit. I met one that drank when a ‘four is whores’ rule was played in King’s Cup, what a muppet in a Huffer puffer.

These dudes are fucking units. Steven Adams is a center, and he can pick up players and turn them into his next Gucci belt. The center, known as a, wait for it, “five”, usually have the most Chad energy, and just hold the ball in only one bloody hand, tower over everyone, dunk on smaller players and generally just have a good time.

Essential yarn: “Shit, he’s tall.”; “Basketballs are pretty big, he holds it like its nothing!”; “Didya know Steven Adams is Valerie Adams brother? Must be a tall family!”

Basketball fanatic level: You know all the lyrics to “Breaking Free” from High School Musical.

With the Nuggets having won the championship, and no basketball equivalent to the Zoo in sight - chances are you’re watching basketball with the boys/gals/enbies on the flat TV. If something goes down, the ecstasy of the crowd won’t be saving your sorry ass. Whether you commit these to memory, have them on your phone, or you’re just reading from the Critic Magazine itself, this lingo is golden.

Basketball tip: Just say “It’s a game of back and forth”; “The first quarter is the worst quarter”; “I’m glad they can play again despite COVID”; “That guy can really dribble the ball then put that same ball in the basket”; “Pint Night?”; “The fourth quarter is what matters.”
The next day: “Did you see that ludicrous display last night?”

Basketball fanatic level: “Bro want to play a game of 2K before town?”

Essential yarns: “MJ the GOAT”; “I wanna be like Mike”; “Have you seen Last Dance on Netflix?”

What an absolute legend. Born in Rotovegas, he moved to Wellington for school, in just two years he went from shit NZ internet speeds to being an NBA rookie. He played just one season for the Wellington Saints before heading to the States. He was then picked to play in the NBA, we stan a king.

Essential yarns: “Did you know he’s Valerie Adams brother?”; “He’ll get 20 point easily”; “Fuck Beauden Barrett, this guy would make a better kicker than him.”

The only person to be able to pull off the mysterious “7-pointer”, Chainz remainz one of the best ballers in the city, if not the world. Lockdown may have slowed down her quest to dunk in every hoop on the planet, but she’ll get it done.
Essential yarns: “What the fuck am I reading?”

This dude is bloody good at basketball. The best player currently playing, everyone needs to know a bit of yakka about The Bron. Always great, always blaming, always angry - LeBron is simultaneously cool, but would also stop replying to emails because one news piece hurt his feelings.

Essential yarns: “His hairline has improved, proud of him”; “He spends 1.5 million dollars on his body, just to lose to Canada?”; “Wasn’t he in that movie with Amy Schumer? Fuck that stunk.”

Basketball fanatic level: You own the 2018 basketball skin in Fortnite.

When your mates yell at the screen, you scream with them. Once the yelling is over, and Noise Control has given you another warning, start up a good natured debate of who is better: LeBron or Michael?

The answer is Michael Jordan, and the movie Space Jam proves it. Until Space Jam 2 comes out in theatres in (hopefully) 2021, LeBron simply hasn’t saved the world from monsters before.

Basketball tip: If the debate arises, be sure to keep referring to 1996 American live-action action/animated sports-biography/comedy film “Space Jam”, as Michael Jordan is top shit and LeBron will simply blame others for his losses. LeBron if you’re reading, you suck.

Basketball fanatic level: You can actually sink 3-pointers. Proud of you, son.