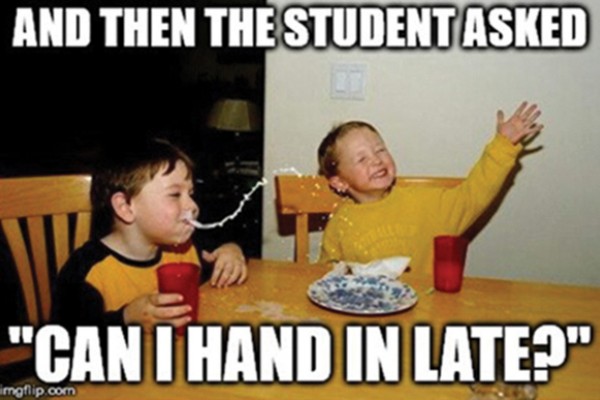 If you want to waste away hours of your life on prime time entertainment, look no further than the Otago University’s Department of Economics (DE) Facebook meme page. There are memes. There are awkward, blurry and sideways photos of people at functions. There are Minions. It goes where other University Departments fail to – almost as if somebody handed the reins of the page over to Linda from reception and said, “this is your baby, Linda. Engage with the people.” And engage she did.

Linda has a real thing for crystals, faeries, and ornaments of dragons wrapped around glass spheres (she’s also partial to tarot readings and numerology). Linda still hasn’t quite gotten the hang of juggling two Facebook accounts, and a personal meme intended for her friends accidentally meandered onto the DE page. Luckily, she was able to fix the snafu with a quick “It must be Friday ... or is it a fantasy?” There’s a reason you were hired, Linda – the ability to think quickly on your feet.

Everyone Linda knows (over the age of 45) has had a crack at answering this one. 43, 56, 50, 21, 98. It was the true conspiracy theory of the week. She figured she would pose it to the DE page, to see if the bright young students could shed some light on the subject.

Linda REALLY liked the look of this cat, and knew that everyone else would appreciate it too. That’s why she posted it twice in one month (firstly to congratulate Summer School students on the halfway mark, then to empathise with students confused about their paper enrolments). Pretty weak, Linda - but it is a good cat nonetheless. Department of Economics chalks up another deserved win.

Linda had been off on fixed leave for a year to help her daughter with Grandchild #2, but she was back with brand new ideas for engaging with the wider community. Hearing some rumbles around the campfire about the validity of “Tourism”, Linda took matters into her own hands with another cat. Behold.

Linda thought the best way to encourage the kids to “hang in there” for exams was most definitely a confused cat that doesn’t understand Economics in the slightest (me too, Linda). Linda could relate with the sentiment, as she had also been “hanging in there” with her diet, having recently started Isagenix shakes to shift the pesky 7 kilograms she received courtesy of cask medium white wines during her sabbatical. Just between you and me, this meme was really more for herself.

Just a casual dinner, no biggie. You’ve earned it, Linda (she’s not on the shakes anymore).

A new dawn approacheth. Linda decided that the Department awards night would be a great chance to try out her new digital point’n’click. She eagerly uploaded the photos in bulk to the DE page the very next day, with all of them carefully the right way up (after the unrotated photos scandal of the “BBQ 2011” album, you just couldn’t be too cautious). For some reason, Facebook’s auto-tag feature wasn’t working on a lot of Linda’s photos, though?

A departmental memo made the rounds this week, with one clear message. Enrolment numbers for Masters were on the decline. Linda nervously chewed her nails, knowing that if this continued, she could find herself on the budget chopping block. Worse still, students might start feeling disenchanted with the Economics Department. There was only one thing to do. Linda would use every tool in her arsenal to fight the impending Masters drought.

Linda was emailed encouraging ‘thank yous’ by some colleagues after her bid to save the department, but then the HoD stopped by her desk to let her know that things weren’t too bad after all. Linda felt a bit silly, and decided to play down the whole debacle by reverse meme-ing herself. Satisfying.

Linda you could have just left the original quote as is (“No, it’s the children who are wrong”). For the first time, I began to feel disappointed in Linda because you never fuck with The Simpsons if you can’t handle the power.

Crisis has once again hit the Department, and this time it’s not just a drill. Enrolment numbers are staggeringly diminished, and this time Linda KNEW that she had to fight fire with fire. It was time for a quick succession of aggressive Masters recruitment memes. Here’s a goodie that I get theoretically, but just don’t find all that funny. Do better please, Linda.

Upon realising that the Masters memes of the past two weeks have been borderline cyberbullying, Linda just wanted to remind everyone that she truly loves them, and also that she conducts most of her transactions in US currency.

Now that Grandchild #2 is 2 years old, Linda has been getting real up close and personal with the Minions, and just can’t get over how adorable they are. Obviously, the Economics kids will think the same too, and so there was no question about how to welcome them all back into the fray. Good shit Linda, you’ve done it again.

“Look sharp, Linda!” the HoD eagerly strode through reception. “There’s a big event on the horizon, can you please alert the community?”

Does a bear shit in the woods?

Linda immediately fired into action with a nondescript Minion meme that truly slaps. “The 2019 Business & Law Expo takes place next Tuesday @ The Link.” Satisfied, she sat back and cracked her knuckles before taking a leisurely sip of her mimosa.

There is still a draft for the war that is the dwindling Masters numbers. What better way for Linda to engage the kids than with their favourite all-girl band from before they were born?

The most recent meme at time of print indicates Linda’s sense of disenchantment with the system. She has realised that she actually doesn’t have the power to make any real changes through Facebook, and has resorted to tired memes stolen from the dark recesses of 2009 academic meme pages. Come on, Linda. Consult the tarots and find your inner activist once more.

At the end of the day, it's all about supply and demand, Paul.