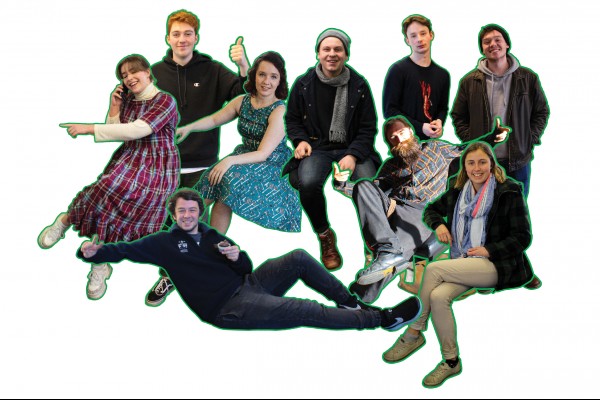 The Fashion of the OUSA Executive

They represent you in the boardroom, but do they rep you on the streets?

The OUSA Exec is there to represent us as students, and a big part of that comes with how they present themselves to the general public. Clothes are the window to the soul, so what better way to get to know the Exec than by roasting their fashion sense. Critic cornered the Exec when they least expected it, so only those who were present got snapped. (Don’t think we won’t be coming for you, though, Sabrina, Taylor and Mary-Jane xx).

Wow, James Health not wearing a black puffer jacket or a green Champion hoodie? Groundbreaking. For the amount of mad stacks and clout he has from being Mr President, you would think he would try and diversify his wardrobe a bit. This outfit screams “second-year breatha in line for Pint Night that thinks he’s super different cos he’s listened to Mac DeMarco”. The slight white t-shirt (presumably AS Colour, maybe Kmart) poking out reflects his “I’m hip and down with the kids and I don’t care about fashion conventions, man” attitude. Also, stop buying pants at Hallensteins. Fuck fast fashion.

I feel like there’re too many conflicting styles going on in Georgia’s outfit. She seems like the hybrid mashup of a farmer lad and his out-of-his-league girlfriend. Her playfully mismatched socks tells us that she’s fun and hip, while her scarf and Postie Plus-type jeans shows she’s here for business. Georgia is so young and beautiful and I feel like she can do so much more with her fit. Fuck it up, go on Smokey Bandit Thrift and get yourself a lovely overpriced Harley Davidson t-shirt to pair with a black turtleneck.

His clothes want you to think that he runs a fight club at the back of Clubs and Socs, but his smile says that his mum picked them out for him. Both could be true. If you look closely you can see the scruff on his face, which implies he doesn’t give too much of a fuck about his appearance, but he also looks far too clean for that to be true. Maybe his mum does his washing, too??

Newly appointed to the Exec, Matthew has not had much time to prepare for the watchdogs of Exec fashion. I will be lenient given it is winter and it’s fucking cold, and we must give him props for the matching beanie and scarf grey tones. However, the combo of the beanie, scarf, tight jeans and brown boots makes him look like he asked me to attend his indie-folk band’s show at Dog with Two Tail’s open mic night.

In all honesty, I’m beginning to think that Jack owns no outer layers aside from this one Swanndri polar fleece thing. Like literally, the only time I haven’t seen him wearing it is when he’s repping his Thursdays in Black merch. A mix between farmer lad in the big city and what my Grandpa would wear to the pub, Jack embodies the presence of both a 21 and 65 year old. I didn’t know they still made elasticated cuff chinos anymore, and I honestly wish it had remained that way. Overall, this outfit seems like what a UniCol first year would wear before heading to pint night, and not in a good way. Try something new, get a pair of Dickies.

It’s nice seeing Josh Smythe in a shirt that covers up his back tattoo.

The whimsically swept back hair, the nonchalant attitude of throwing his jumper on the ground, and a smoulder that could break hearts - Ben could be my daddy anyday. The lobster crew neck screams avant-garde with its pop of colour. The matching shades of black screams “I’m not like other Dunedin boys,” while his Adidas running shoes give him the practicality of sweeping everyone off their feet. I feel like all that would top off this look is a classic pair of low cut Doc Martens, but we can’t all be alty Dunedin goth thots.

Finance Officer Bonnie is out here looking straight cash money. I’m in love with this ‘fit. She knows the golden rule of Dunedin fashion is to layer everything with a turtleneck, and boy does she do it with straight steeze. She has colour coordinated the turtleneck, pattern on the dress, socks and shoes to tie everything together, and I am in awe. The dress is fun and playful in its pattern and cut but screams serious business woman at the same time. Fuck me up.

Kerrin has a very classical beauty to her, which is shown through her lovely wavy haircut, pinafore style dress and tap-dancer dress shoes. While this look is timeless, I feel as if she can spice things up a little. Kerrin is playing it too safe, she needs to get more wild with her dress sense. Throw in some fishnets or a full tattoo sleeve. You don’t need to base your appearance off an extra for Mad Men - you’re better than that.