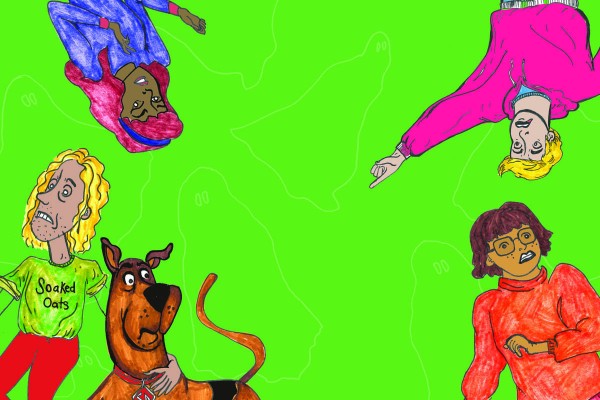 In her final weeks of university, resident fourth year Molly Codyre set out to finally get to the bottom of the most mysterious, unexplainable and often annoying things about life at our beautiful, vomit scattered campus.

1. Why is the only tropical holiday I’m getting this year in Archway 3?

Picture this – it’s early morning, you live a solid walk from uni, you snoozed your alarm for a few too many minutes this morning, and you’re power-walking to class like Kath Day and Kel Knight.

By the time you arrive you’ve elicited a slight glow/heavy perspiration (depending on fitness and caffeine intake). This would all be well and good, and maybe even written off as some handy extra cardio, if that unexpected morning exercise ended in a room with relatively well-managed temperatures. But in Archway 3 there’s none of that. You find yourself panting, desperately trying to stop sweating so the girl next to you will stop giving you side-eye looks of discomfort (yeah I get it, it’s gross). Basically, the lecture theatre is approximately the same temperature as the fiery pits of hell.

My quest for answers led to Property Services, who more or less blamed it on the fact that the buildings are old, and therefore don’t possess air con. Right. They also added that “lecture theatres are heated in the mornings as needed so they are not too cold for the first lectures, then can become warmer if a lot of people are using them frequently”.

A law student who goes to 8am lectures because she is a massive nerd confirmed this. “It burns. It’s like the devil himself turned the heating on in there.”

What we’re taking from this is that they forgot to account for the fact that multiple bodies in a small space with little to no air flow = a hot room regardless of the temperature outside. Fingers crossed they discover the power of air con in the next decade.

It’s 10am, Central Library, your morning coffee has just hit, and you need a solid 5-minutes entertainment to distract you from the fact that the landing pad you put together is just definitely not going to hide from all 15 other people in the bathroom that you’re 100% doing a number 2.

You open your phone and watch as the Instagram feed loads, slowly, but surely, before the dreaded “You are not connected to the internet” message arises. A slow panic builds. The person in the cubicle next to you coughs. Is this the University’s secret way of trying to stop masses of coffee-fuelled, stressed students from gassing out the bathrooms?

Well, the answer actually came from a random dude on Yahoo Answers, who provided this boring response:

“The Central Library bathrooms have a metal sheet on the door to prevent its wood from getting soaked. This reflects away most of the RF signal. There is also a network of pipes which impedes signal and creates multipath, and also water (and moisture) absorbs radio signal at higher frequencies.”

3. Why is Dispensary not open on a Saturday (or a Sunday for that matter)?

I am a private school girl from Auckland, so it’s a given that I’m mildly snobby and spend my money irresponsibly. Therefore, I obviously spend $4.50 every day on a coffee.

My first ever Saturday at the library I was off to spend my hard-earned Studylink cash money on a coffee, when, shock and horror, Dispensary was CLOSED.

I never went to the library on a Saturday again.

I messaged them on Facebook and they basically said they pay their workers living wage or often higher (rate that – makes me feel better about forking out a small mortgage there over my four years at uni), and there aren’t enough students around on a Saturday for it to be profitable. Apparently I’m not the only one who avoids this place like the plague on the weekend.

4. Who renamed Re:Fuel, and what on earth made them go with ‘UBar’ ?

Before we answer this one, we have to answer another question: why was it called Re:Fuel in the first place? It sounds like a coffee bar or somewhere you can grab a quick snack, not a bar with a weird intersection of alty music geeks and breathas out for a pint on Wednesday.

There was originally a bar called Fuel on Frederick St, which closed down in 2003. When the owner found a new location he brought it back as Re:Fuel, a reference that was relevant for about two years but by 2005 was already way over the head of the average patron. By 2017 no one even knew the original bar existed except for the owner. We only found this out because we stumbled on an article in a 15 year old issue of Critic.

They took votes on the new name and some incredibly creative and inventive person developed the name ‘UBar’ (get it? Because it’s underneath Union Hall? Next to Union Grill? A for originality!!). Thank fuck the first owner didn’t copyright Pint Night while he was at it.

Also, in the ‘90s it was called The Loaded Goblin, which I think we can all agree is a way better name.

5. Who, the sweet fuck, actually lives on Baldwin Street?

In a desperate bid to both tick off as many touristy things in Dunedin as possible (it wasn’t hard, there’re only three of them), I once decided to go for a walk up Baldwin Street. About 80% of the way up my life flashed before my eyes. I couldn’t breathe. Every bad decision I had ever made up until that point seemed to pale in comparison to this absolutely life-ruining one.

Then someone walking straight past me, turned, and went into a house. It occurred to me that they had to climb this hill every. Single. Day.

I returned on a different day to face my demons, and made it HALFWAY up the hill again. At that point, luckily, a poor guy walked out of his house. I stopped him like a weirdo, and asked “Wow, how on earth do you live up this hill?!” pairing the question with my best ‘trying to be casual’ fake laugh.

He looked at me like I was asking to buy his first-born child and said, “It’s cheap rent,” before very quickly leaving.

A check on Trade Me found out that 39 Baldwin Street has 2 bedrooms and costs $425 a week to rent. At $212.50 a bedroom ‘cheap’ is very debatable. Especially if you factor in the cost of the never-ending pain that hill causes.

So the answer to the question “Who the fuck lives on Baldwin Street?” is this: idiots. Fucking idiots.

6. How do you control the opening and closing of the windows in the Central Library?

My entire uni career I genuinely thought there was an ‘open/close’ button for the windows. The times when the windows opened and closed in quick succession I thought there were two awful passive aggressive people sitting around me, fighting a silent war.

I felt dumber than a box of ricks, and also vaguely disappointed, when I was informed that they actually open and closed based off a temperature sensor. The sensor is definitely broken because the temperature swings between Antarctica and Archway 3 on a sunny day. There is no in-between.

7. Is it gross that I take my drink bottle into the toilets with me?

Look, ok, I’m obviously not making two separate trips to the bathroom/water filter area (Going through the social anxiety of walking past that many acquaintances is bad enough once thank you). The idea of leaving it outside the bathroom stresses me out. What if someone takes it/touches it/swaps it with theirs?

But the number of drink bottles outside the toilet also made me feel like I was doing something pretty gross by taking it in with me. I decided to leave this one up to the people, and did an Instagram story poll, of which 71% said it wasn’t gross. I did get someone sending me an article saying something about flushing toilets spreading germs far and wide, and that those germs probably land on my drink bottle, which did gross me out pretty badly, but then I remembered 71% majority on Instagram is way more scientific than some academic article so I concluded that it was fine.

8. Why are the exam supervisors all 98 years old and grumpy?

Does the uni ever hire younger people to do this job? I feel like I could write the answers all over my hands and they would be too vision-impaired to actually see.

One accompanied me to the loo during an exam and they walked so slowly I started getting  annoyed that their hobbling was cutting into my exam time. I presume the uni did their last exam supervisor intake sometime in the 1940s and hired such loyal staff that there has been no turnover since then.

According to my lovely, albeit painfully slow, piss escort, it “gets me out of the house,” which is cute but also very sad.

9. Why do the tiles outside Burns turn into the fucking Winter Olympics every time it rains?

You’re walking into uni from Albany Street. It’s rainy and miserable and you’re already upset about leaving your bed. You take that pathway between Central Library and Burns, trudging a long grumpily, when suddenly your heat skips a beat and you lose your footing and desperately pull some Chazz Michael Michaels skating moves to stop yourself from ending ass-up on the wet concrete.

So it turns out not only is the uni fully aware of the slippery tiles, they’ve already tried to fix them once, and failed. The uni has had over 80 incidents of people slipping on tiles in the last two decades. Most of them were in the old Commerce Building; they even had to pay out $60,000 after someone fell and broke their back.

Basically the tiles are super old and all the grip has been worn down, so last year they tried to make them safer by putting adhesive and grit on them. Unfortunately, the grit was kinda shit, so it’s already wearing off and bringing back the slippery slide.

10. How many coffees do I need to buy before the Hussey & Laredo guy asks me to marry him?