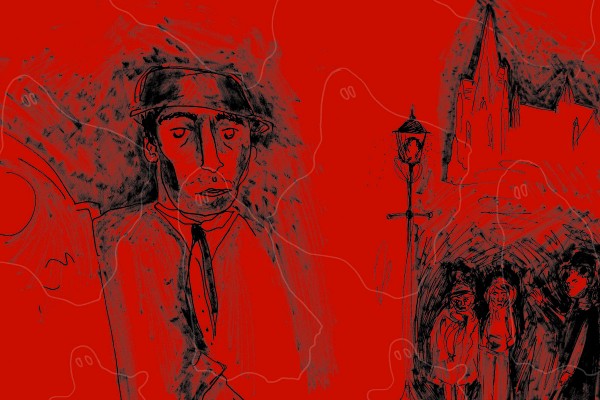 Dunedin Ghost Tours: A Journey Through a City’s Dark Past

On a still, chilly Wednesday night, fellow Critic writer Caroline Moratti and I find ourselves standing underneath a streetlamp in the Octagon. The pavement glitters with a sense of anticipation, hiding the untold stories of the night.

Waiting for Andrew “The Hair Raiser” Smith, we conjure up images of what he might be like. This is a man who has spent the last twenty years living and breathing the more shady side of Dunedin’s history, sharing it with all who dare accompany him on a tour.

I hope he’s wearing a cape.

Out of nowhere, we are greeted by a stealthy man with a ye olde time short top hat and a long black coat. He looks like a cross between Vincent Price and Little Finger from Game of Thrones. The overall effect is pretty hot, so we are more than eager to cruise dark alleys with this fine specimen.

As the tour unfurls, it is not hard to see what a great love for this city Andrew has. His knowledge of Dunedin’s past is extensive and passionate, and it shows in the effortless way that he wields tales of local truth and legend.

Starting with the first site of the hospital, a local lawyer walks past, greeting Andrew. “That’s the scariest lawyer in Dunedin,” Andrew remarks. This tour is already good. One thing that happens repeatedly throughout the tour is that people passing by seem to know Andrew, which makes sense when you consider that he’s been doing this most nights for years. One guy even asks him if he will sell him some weed. I tell him he might end as some cool Dunedin version of the Christchurch Wizard.

“Yeah, see, people have said about the fucking wizard! I’m not gonna be the wizard!!!! I’m not a fucking wizard! Some people thought I was Dunedin’s magician, with my cape. So I had to start mixing it up. You know, ‘Dunedin’s magician - here he comes in a cape.’ Not really the look I was going for,” Andrew protests. That answers my question about why there is no cape tonight.

The original site of the hospital is in the Octagon, and we are shocked to learn that the original morgue is here too - right in 10 Bar. “The corpse cavities in the wall are still there, if you look behind the bar,” Andrew replies to our surprised faces. If ever there was a reason to go to 10 Bar, this is it. Around the back on Bath Street is where the corpses used to be delivered. Spooky!

“I do like some of the more mysterious darker sides to Dunedin. I’ve always loved how people have tried to wash it away, in some ways,” Andrew says.

We are now standing in a tiny, dark alleyway behind Regent Theatre, “a snicket,” as Andrew calls it, where people can get through from here to the Octagon. It’s easy to transport back in time to imagine ye olde Dunedin people using this tiny alleyway during the early 1900s.

“I mainly got into this because I really love dark alleyways, and wanted an excuse to bring people down dark alleyways.” It’s hard not to like this guy.

Andrew is familiar with quite a few ghost mysteries around Dunedin. Memorably in 2012, there was a ghost sighting at Cumberland Hall. A ghost known as the “Grey Lady” was seen by students, and the hall had to call in the chaplain and a local kaumātua to bless the hall, after students were unable to sleep following the sighting. The students noticed a chill in the air and a weird smell, after which they saw a black figure beside the fire hydrant. The “Grey Lady” is said to have been an unfit mother whose baby was taken from her, and she then spent her time haunting the nurse who took the baby (back in the day, Cumberland was a nurses’ home).

According to Andrew, there are multiple stories about this ghost, and she has been seen at the original site of the hospital and at the old psych ward of Dunedin Hospital.

Caroline asks Andrew what his advice is for anyone who sees a ghost.

“Just don’t tell anyone! [laughs]. No, it’s just that most people that see a ghost, in my experience, they’ve thought it was a real person. So you think you’ve done a tour tonight with a guy in a hat and coat, but the guy that used to do the ghost tours was killed five years ago. Right? So the person that took you around tonight looked like a real person [laughs].”

For the rest of the tour, all I can think of is how cool it would be if the guy doing ghost tours was legitimately a ghost.

The great thing about Andrew is that he offers a choose-your-own-adventure experience.

“I tell the stories on the tour, give the history, it’s up to you what you make of the ghost story. I’m not standing there telling you, you gotta believe in ghosts - that’s up to you, it’s not for me to tell you. I believe [in ghosts], based on my research and what I’ve seen.”

There was one instance during his Northern Cemetery tour where Andrew actually had to cut the tour short because of a paranormal disturbance. “We had to run out of there, there were footsteps and one of the guests freaked out and said she knew it to be a Māori spirit.”

Andrew says he also encountered a haunted student flat a while back.

“There were students that claimed their flat had been broken into, and it was realised that the flat was completely fine, as in, not broken into. But how do you explain all their stuff on the floor? And so every time they came back to their flat, the kitchen was ransacked, with no sign of a break in. But in the end, the owner of the house said, ‘I’ve heard this all before, there is definitely a ghost here’ and everyone was convinced there was, and they wanted out of their lease, and they went to the tribunal, and the tribunal said ‘well, that’s fine, but you’ve got to prove it.’ That would be a good ten years ago now. I think it was in Leith St, from memory.”

As we wind further around Dunedin’s damp pavements, we stop at First Church, where we learn about a jilted bride who dove off the cliff upon which the church sits, and onto the rocky shore below (when the sea reached in that far; it’s all reclaimed land now). Many people have seen this jilted bride ghost; she drew crowds back in the day. The Leviathan Hotel, across the street, is said to be an incredibly haunted place, too. “Dunedin is a ghost town,” Andrew remarks casually. He’d know - he’s got a book about it in the works, ‘Confessions of a Ghost Guide.’

As well as the city tour we are on, Andrew guides others as well, because Dunedin is old and spooky as fuck. “This is the first tour, and the second tour I started was the Northern Cemetery tour, and some of the people we talk about on this tour, they’re buried up there - those tours tie in. That’s creepy, because obviously it’s in the cemetery and it’s dark, it’s at night in the bushes, and it’s famous Dunedinites, famous New Zealanders, you know, grave theft, weirdos, executed prisoners, that sort of stuff. Then there’s the Port Chalmers tour, which is all pirates, brothels, ghost stories, myths. There’s an old cemetery there, not a lot of people know where it is. That’s quite popular too. And Chick’s Hotel. I’ve got shitloads of stories about Chick’s, it’s in the book.”

Caroline asks Andrew how working nights for the past 20 years has affected his social life (she’s clearly digging to see if he has a girlfriend).

Andrew laughs. “It was great for my personal life when I first started it, because that was how I met women! Really! It was good, I enjoyed that part of it, ‘cause you meet people from all over the world. It actually aided my personal life. If you have a fun group, with awesome people, then you have a drink afterwards. So for the first 10 years of this tour, I was drunk. I would wake up thinking, “oh my god”. But if you’re pale and sickly, it adds to it.”

As we finish the tour, we thank Andrew for his encyclopedic knowledge of local lore and enthusiasm for the macabre. He is truly an interesting character, and Dunedin is lucky to have him here keeping our sinister history alive. So if you see a man wearing a cloak and hat traipsing around a dark alley, go say hi - chances are it’s the ghost of Andrew!

To hook yourself up with a Hair Raiser tour, check out http://www.hairraisertours.com/