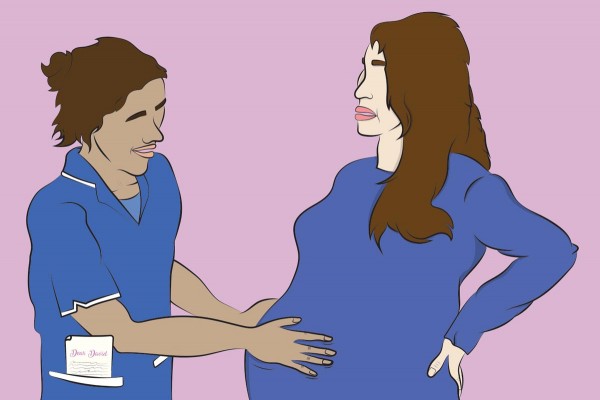 Babies are the shitty, screaming, harbingers of shit that are one of the ‘perks’ of settling down and becoming an actual adult. Luckily most of us are not in Gore, so it’s not something we have to consider for at least a few more years.

And even better, there’s a whole profession dedicated to making that whole miserable process so much easier. Midwives (not, contrary to popular belief, what you call your fiancée), dedicate their lives to making pushing a goddamn human out of genitals actually possible – and for that alone they should be millionaires.

Unfortunately, that’s not how it works. A recent casual walk to Rob Roy revealed two things: one, we actually have an MP in Dunedin, and two, that his office is absolutely covered in letters. They were letters from midwives all over New Zealand, telling David Clark, the Minister of Health, about the awful conditions they are working in. Women are going into debt, struggling to feed their families and – worst of all – having to move to Australia. It was enough to put me off my ice cream.

The movement is called “Dear David”. By plastering letters from midwives to David Clark’s office, hopefully he, or at least his secretary when she took them down, would be forced to read them and understand the situation these people are in. As organiser, Charlie Ferris Charlie put it, “This campaign aims to create a clear and united voice of midwives and women across the country (and even from overseas), to share our incredible stories, and be heard by those in power”.

Currently, rural midwifes are “struggling to get by on $7.23 an hour” after their various expenses. “With such low pay, they are often unable to do basic things like pay their rent or mortgage – let alone pay for fuel, car maintenance, ongoing education, medical equipment, and locum cover for some time off work.” Charlie has even had to call her mum and ask for money to put fuel in her tank to get to work. That’s something that your parents will give you shit for as a student, yet adult medical professionals are having to do this? In a totally unrelated segue, want to guess how much the CEO of Sky City was paid in 2016? Just under 6.5 million dollars. That’s $3,125 an hour. But running a shit casino and a tall tower is far more important than helping our next generation be born, right? Now I’m not saying eat the rich and burn down the system, but I’m not necessarily condemning it either.

Of the letters Charlie had received from other midwives in New Zealand, two really stuck out to her. “The most heartbreaking was a midwife who was miscarrying and couldn’t afford to pay anyone to take over from her caseload for longer than two days. She delivered another woman’s baby while miscarrying her own. Another midwife wet herself after going hours on end with no break.” Long hours and hard days were expected in the industry, but no one signed up for, or should be having to go through, this, especially for such shit pay. And they’ve been leaving in droves, mostly to Australia, where they can perform the same job at actually liveable wages. Who would have thought – when you don’t pay people a liveable wage, they won’t be able to work anymore!

Otago Polytech Midwifery student Rosie Naylor said she wants to be a midwife because she is a passionate feminist and an advocate for women’s health. But she says “The current situation can seem very daunting at times. I had to unfollow the Dear David facebook page because it was too overwhelming to be constantly reading the posts while scrolling through facebook.”

“As students we see it all – we see the overworked core midwives in the understaffed maternity wards; we work with the LMC midwives who are burnt out, sleep deprived and seriously underpaid for the work that they do. I get frustrated because it really is such incredibly valuable work – and I feel like midwifery is undervalued and disrespected as a profession because it is female dominated.”

“We don't do it because we love cuddling babies – there’s a whole lot more to it than that. It’s about supporting and empowering women in their journey of pregnancy, labour, birth and the 6-week postnatal period. It’s about being an advocate for pregnancy and birth as a normal life event, and working alongside other health professionals if things venture outside of the normal.”

Despite seeing the state of the industry first-hand, Rose says she it has made her any less passionate to finish her degree and work as a midwife, but “I definitely hope that the situation will get better by the time I graduate.”

Fortunately, there may be changes coming in soon. The New Zealand College of Midwives and the Ministry of Health have managed to negotiate for a new method of funding independent midwives. According to Charlie, “they will have business costs covered, there will be money for a second midwife when needed (e.g. for long births or emergencies), and we will also be able to pay for a locum midwife when needed.” But while the agreement has been negotiated, agreed upon and signed, it still needs to be put into practice and funded, by May 2018 in the next budget.

Reaching out to David’s office for comment returned a press statement that, while sounding good, was a bit of a mixed bag. Shock, horror, a politician being ambiguous? Although he does “accept that there is a problem here . . . [and that] there are issues of professional isolation, burnout and attrition,” he goes on to warn that it can’t just be fixed straight away in the first budget.

Labour claims it still has a lot to fix from the last government’s actions, which pulled money from our public services like it was a particularly plump ponytail.

In David’s words, “They chose to favour tax cuts over our public health system.” Which is basically politician speak for they were twats. But so far on this issue, it’s all just words from the Labour Party. It’s not going to be until the budget is revealed that we’ll actually know how much we can count on Labour to hold to their promises. As Charlie told me, “They campaigned hard to be the ones to fix this, and they have the responsibility to turn this around before we hit a real crisis point.”

And now, other parts of the health services are speaking out about their treatment as well. Nurses are currently voting throughout New Zealand on whether to go on strike to protest their treatment and pay. As one nurse explained, “Nurses have been undervalued for many years whilst others around the world and in other areas of employment move forward.” Does that sound familiar?

Another nurse said that although she saw nursing “as both a passion and a vocation . . . [but] that is not a reason or an excuse to continue to accept a low pay that does not acknowledge both the experience we bring and responsibility we carry.”

Now you may be asking yourself, as you read this in the Link drinking that brown water they call coffee, ‘why do I give a shit? This isn’t a student issue.’ But this is an issue for all of us. Never mind that some of us will end up being parents far earlier than we may think, most likely due to our extreme idiocy when it comes to actually using contraceptives properly (wrap it up for fuck’s sake). It’s one of the many issues that have been building up for a long time and is just about ready to become a full-blown crisis.

Otago students voted overwhelemingly in support of the new government. 68% of votes at campus polling booths went to the left bloc of Labour and the Greens, and that goes up to 74% if you include TOP.

We went nuts for Jacinda, for the policies that were easy to sell and to relate to us, like higher Studylink and free tertiary fees (and if you didn’t, don’t you have a 100 level BCom class to not pay attention in?).

But that shouldn’t be where we stop caring. When it comes to other issues, like the midwife crisis, we should be aware of it, and hold Labour accountable. Yes, it’s not as exciting, and it doesn’t benefit most of you right this second. But if (and I’m not saying they will) Labour goes backward even slightly, they have got to be called the fuck out.

Do you really want to be giving birth to your little Hyde Street mistake in a bathtub by yourself?