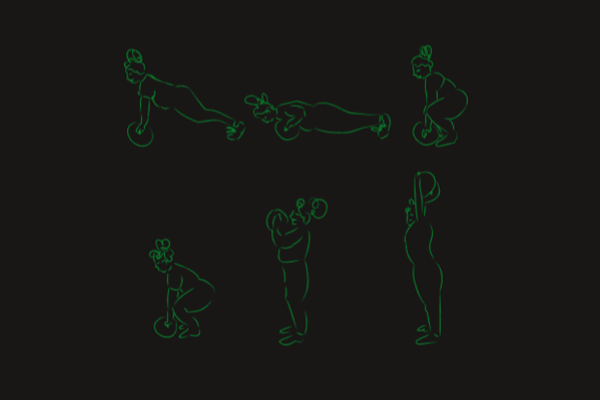 I’m the first to admit it; I’ve gone incredibly soft and sedentary since high school. What used to be a capable and fit dancer’s body has slowly deteriorated into good hugs and heavy partying, usually accompanied by carb-laden food and quality banter, which is not actually a thing that burns calories, sadly.

My friends, on the other hand, have remained infuriatingly gorgeous Lululemon-encrusted examples of strength, grace and health. And it’s starting to get tiresome being the fatty that doesn’t want to go for a 45-minute walk before our coffee date, thankyouverymuch.

Being a geology student has only solemnly reminded me just how shit I am at walking up any semblance of a gentle incline, and so I decided that I would become one of the fitness elite. With the eager guidance of my super-fit lifelong friend Sheree, I joined Dunedin’s CrossFit Uncut. Here is the story of my first week.

After a consultation with the owner, Jeff, it was determined that I would come in for three classes during the first week to see what I thought. He was a lovely man who assured me that things could be scaled for all levels (I was skeptical about this, as generally I am too used-up for even the most basic of pursuits) and upon checking that I was able to do some foundation exercises (squats! ugh!), we scheduled in some classes.

I was scared shitless. As an aside, I really needed to enjoy this, because if not, I’d find a way to talk myself out of it (I once talked myself out of a BodyPump class when I was already there and had set up my bench). Plus, what was I even going to be able to do? Six starjumps followed by 1 x rep of a stroke?
9.15am approached and I got myself down to the CrossFit box. Unsure of what the hell to do, I stood there nervously while people with actual muscles did fit people things, like breathing with ease. The instructor, Suz, was super nice and assured me I’d be okay.

After a warmup that is probably easy for regular people yet left me red and sweaty, we started with skipping, which is something that I hadn’t attempted since the mid ‘90s, when Jump Rope For Heart was all the rage. Unbelievably, I could still do this, opting for single skips while praying for my boobs, which were determined, it seemed, to escape the clutches of my bra. Fuck you, boobs. Mental note to self: go to Bendon on payday, or invest in some duct tape.

We moved from skipping to “back squats” – squatting with a bar laden with weights on your back – which I heroically did with no barbell. Honestly, squatting my own vast bodyweight would have been more than what the sporty people were doing on their barbells. So pretty much I was a machine. Discovering that I could actually do regular squats properly was a revelation – my first anointment into the Halls of the Fitness Elite. We also had to step over boxes, holding dumbbells, and I saw no shame in having the smallest box by at least 50%. I also held no dumbbells. Character building, I thought to myself. A lesson in humility. I actually finished the WOD (workout of the day), and left feeling amazing. Exhausted, but AMAZING. I spent the rest of the day looking at recipes involving wholemeal spaghetti and spinach. No, really. I also treated myself to the following: flossing before bed, and more water than usual.
#newbodywhodis

At lunchtime, I spent time peering out the office window at some brave people who were doing a really cringey-looking free exercise class on the quad lawn. It’s no CrossFit, I thought smugly as I struggled to sit down at my computer.

I treated myself to lots of lasagne. “Treat yo’self!” I exclaimed ecstatically to myself, spilling food all down my shirt while binge-watching Friends. I had earned this lasagne.

6.15am. What the actual fuck? Why was I standing bleary-eyed in this large cold hall, surrounded by men with muscles doing “split jerks”?

What’s a “split jerk”? Holding a bar over my head felt weird. I’m far more accustomed to gripping hot dogs and penises. Also, you can’t eat a metal bar. I know this, because I tried.
There were more squats and more skipping. Also lifting more things above my head. I wanted bed. I wanted a hot dog.

Go to hell, world. My body is no longer my own. We are at war.

Enthused about having a class with a couple of my friends, including Sheree (the instigator of all this madness), I trundled on down to the box (CrossFit gym) at midday. There were cones and ladders set up on the floor and I couldn’t have been more alarmed than if we were being given the beep test (which is legitimately a thing that happens at CrossFit, for those of you who delighted in leaving the beep test behind with your virginity). We were working on speed and agility, the first of which I would have loved a line of, thankyouverymuch, and the second of which has eluded me for the past 15 years. We had to run. In front of everybody. While being timed. For the record, I managed to run around some tyres and cones in 24 seconds. Everyone else did it in around 17-19 seconds, and I think I nearly had a stroke, which I was told isn’t actually something that I can proudly record on my CrossFit performance stats. Never mind.

Ah, the day of rest. And food. I ate back in calories absolutely everything that I burned this week doing CrossFit, re-carbed up and ready to take on another week (that’s how this exercise and nutrition thing works, right?).
#wellness.