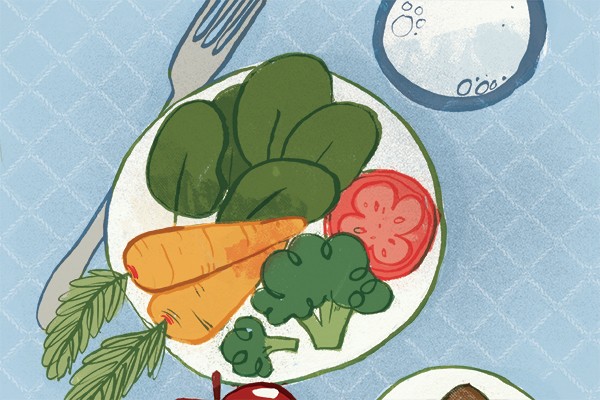 Kirsty Gordge undergoes a vegan lifestyle for a week to learn the whys and hows of veganism. The three main enlightenments are: It is not a diet; it is a lifestyle. It is not just about food; it is about animal testing. And if you do it properly, it won’t restrict your life to lettuce and carrots.

As I opened the fridge, I realised my shelf was full of dairy: milk, butter, cheese, yoghurt. Moving it all to one side, I indulgently drank the rest of my milk and made way for the vegan food I was about to fill it with. I made pumpkin soup: onions, spices, pumpkin, water, all boiled up and whizzed to a pulp.

I also made vegan pizza with wholemeal wraps, tomato paste and veges. (I didn’t realise that cheese is indeed a binding agent of pizza that keeps all the toppings on, that my cheese-less pizza might not be as pro as I thought and that I should have probably looked up a proper recipe).

Third creation: vegan brownies made with oil instead of butter and eggs. They obviously weren’t that bad because my friends managed to wolf down half of them without knowing they were vegan.

Snowing. Of course it is. The day I decide to cut the main fat supply out of my diet, it snows. Typical.

7:20am Tried my usual breakfast of porridge oats and dates, substituting my usual milk for almond milk (not as creamy, but bearable), and a blackcurrant and apple tea.

12:15pm Lunch of pumpkin soup. Reluctantly swapped the glorious butter on my toast for peanut butter. Flatmate tried to compliment the flavour match. I saw through it. We ate in silence.

10:00am Lunch of vegan pizza (Yes, lunch at 10am. Continuous uni lectures in the middle of the day do this to you).

7:00pm Brown curried lentils with chickpeas, onions and carrots — TOO MUCH CURRY POWDER.

8:00pm Sauna to sweat out the curry powder.

8:00am Oats with soy milk this time, and a banana. Soy is marginally better than almond! More tea.

7:00pm Homemade wedges rubbed in fresh rosemary with salt and pepper,topped off with a Speights, of course.

8:30am Muesli with soy milk. Soy milk tastes like wood. A glass of warm water with apple cider vinegar.

2:00pm Called Tayla O’Driscoll, a passionate vegan, to find out how to do it properly. Twenty minutes later, feeling very enlightened.

4:00pm Running errands in town in the rain, getting agitated. Told to eat some food and stop being so hangry.

4:30pm Back at home and starting to make vegetable stock from scratch. Hooned half a loaf of ciabatta in the meantime.

5:00pm Stock boiling, still hungry, ate a civilised “marmite on toast” to tide me over.

7:00pm Finally our dinner is ready! “Hearty vegan polenta and kale soup with miso and toasted sesame oil” is done! Very tasty, different and wouldn’t be too time-consuming if using ready-made stock. Stayed full all evening.

8:30am Muesli with soy milk and banana. Tried soy milk in normal tea, and it wasn’t bad. Definitely a love–hate relationship with Mr Soy.

2:00pm Made some homemade wedges again.

4:00pm Got advice from Courtenay Van Westbrook, another hearty vegan, and was feeling less alone in the new lifestyle. Glad to hear that I have been eating a “normal” vegan breakfast. Feeling proud!

6:00pm I realised that some margarines are vegan! What have I been doing all week?

7:30pm Baking! Tayla gave me a lovely recipe for afghans which ended in me munching on three before bedtime.

8:00am Porridge oats and dates – I didn’t even notice the milk was soy instead of dairy this morning.

12:00pm Beans on toast! A very normal meal that is vegan without thinking about it.

I thought that when it was over I would drink a litre of milk to make up for all the cows I saved over the week, but there was actually less celebrating than anticipated. What was I actually celebrating? That I’d managed to go a whole week without causing indirect harm to animals? That I could now continue on with my indirectly-harming-animals life? This led to some pretty heavy life evaluation.

This seven-day trial has enlightened me not only about how many products involve animals in some way, but also how dairy is promoted as necessary to our diet. I am not completely converted for now; I did eat dairy and a little meat on the eighth day. But the week of being vegan changed how I think about the lifestyle – I’ll carry on buying vegan hygiene and cosmetic products, as well as avoiding super-processed meat from Fatty Lane. I could even happily eat vegan meals a few times a week.

Being vegan is not a weight-loss diet, clearly. I gained 200g over the week, which is a pretty normal fluctuation anyway. It is simply a moral choice to consume an animal-free diet.

As explained by Tayla, we don’t actually need meat to survive. She believes that because New Zealand’s meat and dairy industries constitute a huge part of the economy, we have been falsely led to believe we need animal products in order to be healthy. This is good for the country — and yes, can be part of a balanced diet. However, if you choose to opt out of the industry altogether, you are not harming your health. There are many plant-based sources of calcium, such as dark leafy greens and nuts. Just because you aren’t consuming butter, milk or cheese, it doesn’t mean you’re going to get osteoporosis.

A vegan life doesn’t mean a life of tofu either. Falafel is a tasty and versatile non-meat option and can be used to make burger patties and “meat”balls. It takes a wee bit more of an effort to get all of your vitamins just like you do in a “normal” diet.  But it isn’t difficult and you soon get used to it. The first time you go to the supermarket, cancel your plans for the rest of the day, because you’ll spend hours reading nutrition information. But when you have learned what you can and can’t have, and which brands are reliable, it’s a piece of cake (vegan cake, that is). And because you are no longer buying meat and dairy, it’s reasonably cheap.

After a few days I got into the swing of it and started eating normal foods again — just without meat or dairy. Something that might put some people off is how inconvenient it can be. But you can still eat out. There are many restaurants in Dunedin that have plenty of vegetarian options to choose from. Making the meal vegan is a matter of negotiating with the waiter about removing an ingredient. You will soon learn which places are willing to accommodate.

Vegans are also careful to check what is in cosmetics and hygiene products, that they aren’t tested on animals or contain any animal products. Many “safe” brands are listed online, which saves the hours of checking all the bottles in the store. They aren’t all expensive, and some can be found in Kmart or at the supermarket. Even buying leather shoes and taking certain medication do not sit right with some vegans. Research is required, and of course personal guidelines have to be set. Leslie Lawker tried being vegan for a year because she heard that if everybody were vegan, it would solve world hunger in three days. After a year she decided that the world was still hungry and she might as well have her bacon. But, as Courtenay reminds us all, “If you want to do it bad enough, you will find a way to stick to it.”

No one is a perfect vegan; sometimes people slip up and make mistakes. Vegans are vegan because they are unhappy with how animals are treated and believe that sentient beings don’t deserve or need to die for humans to live. Such strong views often lead to stereotyping and policing of behaviour.

Not every vegan is going to try to convert you. Although some feel very strongly about educating others (Tayla sees meat cooking in the pan as a “disconnected body part” and is quite disturbed), some vegans will not discuss it. Courtenay believes it has to come from within; it’s a big commitment that you have to WANT to stick to — if you’re doing it just because someone told you to, then it probably won’t last. Courtenay stated: “People do it not so they can yell at you how bad of a person you are f or killing animals, but because they want to improve the inhumane treatment of animals in slaughterhouses, or stop the environment being destroyed by deforestation or intensive farming.”

A programme called Farmwatch shows undercover footage of New Zealand farms, investigating them, exposing them and leading to rescue of the animals.

Earthlings is a documentary that can help people understand why vegans are vegans, and maybe even influence you to become one.

Veganism and Animal Rights Society (VARS — a University of Otago community). Can be found on Facebook and is full of people right here in Dunedin who will educate you about veganism and support you if you are considering taking up veganism.

features.peta.org/how-to-go-vegan/ Peta provides a step-by-step guide on what to buy, what to make, and where to eat to fit a vegan life.

Livevegan.org Live Vegan provides everything from cooking, socialising and shopping in ways that follow veganism.

Vegan Brands to Get You Started