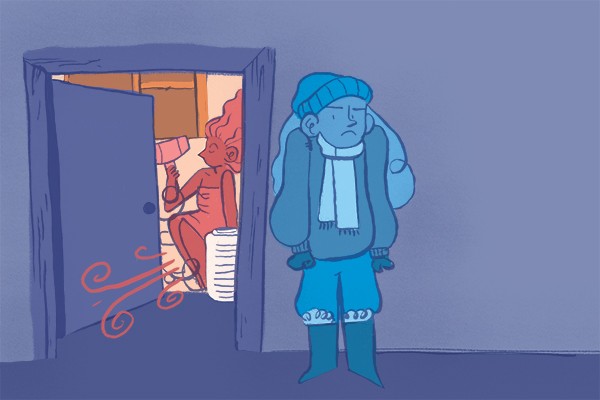 Confessions of a Quidnunc

Passive aggressive behaviour can make for a miserably infuriating existence. Living with passive aggressive flatmates is the worst, but being the passive aggressive flatmate is exponentially more troubling. As the fair and forever-on-the-fence sleuth that I am, I compiled a list of stories from both sides of the spectrum for you to relate to as you wish. P.S. for those of you frowning at the title, a quidnunc refers to “an inquisitive and gossipy person”. No offence, but it might be an idea to read a book.

As we head into winter, the trending topic of conversation has begun to shift. Whispered gossip sessions in the library that once consisted of that “friend” who slept with TWO guys on Thursday are now turning into pissed-off rants about that flatmate who used the dryer for half an hour just to shrink her jeans. The honeymoon period of living with your friends has come to an end, and now your only outlet for all their annoying little habits is to complain to a third party. I decided to ask around a bunch of people to get their candid confessions about partaking in, or suffering from, the passive aggressive behaviour that stems from being genuinely sick of your flatmates not even halfway into the year.

Like the majority of us “basic bitches” (What? It’s a thing now, I might as well use it), I enjoy a good scandal. The Otago Uni Confessions page has been my go-to for procrastination since forever ago, but sadly its contribution has diminished significantly. Instead I’ve had to find other ways to squander valuable studying time, like watching endless clips of cute animals or sprawling on my flatmates’ beds and complaining about how many internals I have due. Luckily for me, passive aggressive antics in flats never get old, and people are always willing to dish the dirt on their not-so-blissful living arrangements.

Thin-Walled Problems: “We had very thin walls at my old flat. One of my flatmates got really sick once and so was coughing crazy loud — everyone could hear him. Instead of trying to ignore it, another flatmate began imitating his harsh spluttering in some stupid attempt to show how annoying it was.”

The Urban Dictionary (UD) definition of passive aggressive is: “a defence mechanism that allows people who aren’t comfortable being openly aggressive get what they want under the guise of still trying to please others. They want their way, but they also want everyone to still like them.” UD hit the nail on the head with that one. There are so many different ways to create animosity within a flat, and cleanliness — or a lack thereof — plays a huge part in instigating passive aggressive encounters.

Kitchen Bitch: “If someone in my flat had left their dirty pots on the stove or dishes in the sink, I would take said crockery and find somewhere else for it. Say, their bed. Or if I was feeling especially generous, their pillow.”

He’s a Keeper...Or Not: “My old flatmate used to leave passive ggressive notes for us to read, instead of confronting us in person. Things like, ‘If the rubbish bin is full, take it out!’ and ‘If the compost bin is full, empty it.’ My personal favourite was ‘If the floor is messy, don’t be afraid to vacuum it outside of the weekend chores. P.S. Stop eating my meringues!!!’ We hadn’t eaten her stupid meringues. Her boyfriend’s friend had.”

How Not to Feng Shui: “Last year we decided to move the furniture in the lounge to get more of a feng shui vibe. We spent a good chunk of the morning shifting it around, and by the end, we were pretty stoked with it! We had to be at uni for the rest of the day, and when we finally got back home, one of our flatmates had put everything back to its original position. She never even mentioned it afterwards, just pretended like nothing had happened. Safe to say, she killed the feng shui.”

If you have never experienced a passive aggressive fight, you a) have your head in the clouds, or b) are one of the few lucky ones to have surpassed the confines of “friendship” and moved into that special place reserved only for family where arguments abound and forgiveness is not only a requirement but an expectation. Either that, or you take your altercations “outside” — you shout a couple of insults, throw a few punches, get it all out in the open and then go out for dinner afterwards. There aren’t many out there who are as lucky as this, however. Most of us traipse through years of flatting with slumped shoulders and feet dragging when we realise that living with friends isn’t as exciting as sleepovers would have you believe.

How Much is Too Much?: “My old flatmate had A LOT of sex. Like so much. And we could never keep up. I came out of my room one day and saw a naked boy running on the tiles, dripping wet. He slipped and I thought he was going to smash his head and I’d have to give this nude man CPR. Anyway, one time I was trying to study but she was having the loudest sex in the next room. It was night-time so I couldn’t just go to the library. Instead I sat in the lounge and started blaring Destiny’s Child until they came out and then proceeded to make really awkward conversation … I think I’m the bitch flatmate.”

Avoiding passive aggressive feuds is not easy, but fight and forgiveness is better. I know that I can fight with my brother until the sun goes down, but I’ll always forgive him a total of two seconds later. He may take a little longer to exonerate me, but, hey, we’re not all saints. It is the polar opposite of passive aggressive behaviour because it gets everything out in the open in a very confrontational way.

The Plight of the Night Owl: “In my first ever flat, downstairs we had one flatmate who was an early bird, so he got up at 6am every morning. However, the four of us upstairs were all night owls, so we would all stay up until 2–3am talking/watching TV/playing games, etc. Obviously, this would keep him awake andt would piss him off. Instead of confronting us about it … he’d just blast music when he woke up at full volume in order to punish us. Good. Times.”

Winter is upon us and, with it, the source of many a passive aggressive argument: the dreaded electricity bill. For as long as there has been electricity and house sharing, there have been arguments concerning power usage. Even back in my family home, I distinctly remember being told to turn off lights in unused areas of the house or to cut the power to my stereo after vacating my bedroom (my parents are the vocal save-the-whales type so, for them, conserving energy was a no brainer).

You’re Clean Enough: “When the boys were taking too long in the shower we used to turn on the hot water or flush the toilet to get them out of there quick smart. We also disabled our flatmate’s heater and made him find all the pieces as a ‘nice’ way to tell him that he was using it too much.”

Anti-Confrontational: “My friend used to stay at my flat a lot last year. She didn’t use any electricity over and above what I already used on my own. In the middle of winter, one of my flatmates posted an angry status on our flat page complaining about a $10 increase in the power bill. Another flatmate then commented, asking whether the increase was due to the ‘extra addition’ to our flat. Instead of confronting me about it, they just skirted around the problem and expected me to get the hint.”

Boiling Point: “My flatmate posted on our Facebook group over the holidays to let us know how much we each had to chip in for the electricity bill. She finished by saying: ‘This seems a bit high for so early in the year. Maybe we should consider drinking less tea because boiling the kettle seven times a day is a bit excessive.’ Seriously? Shorter showers or not using the dryer wasn’t the first thing that came to mind?”

Yes, the arrival of winter will bring out a new side to your flatmates that you may not like and, yes, you’ll all get pretty snarky about the mess or the excessive showering or the unnecessary use of the dishwasher. So what? Suck it up. Sit your flatmates down and talk to them about it, instead of fluffing around the edges of the problem by dropping ambiguous hints and passing vague comments. If surviving the next seven months is a priority to you, then you must embrace the art of confrontation. It’ll get you places no passive aggressive note ever could.

Will it be passive aggressive of me to leave this article on each of my flatmate’s beds once it goes to print? Do you think they’ll get the hint? Maybe I should put a sticky note on it, like: “I think you guys would really enjoy this. I like hot water as much as the next person. It would be super cool if you remembered that next time you shower.” Followed by a smiley face, just to keep things classy.