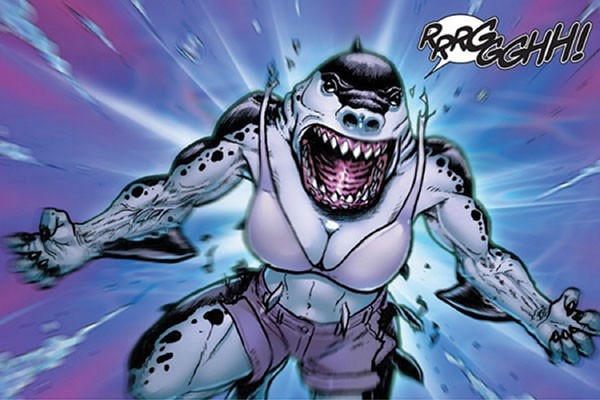 It’s that time of year again. Marvel’s latest instalment, Avengers: Age of Ultron, is out and the world has been bubbling with excitement in the lead-up to its release. Superhero movies are something of a phenomenon at the moment. The Avengers’ first instalment came out in 2012, and is the third-highest-grossing film in the world, closely following Avatar and Titanic. The success of super films is obvious, with comic-related nerd merchandise popping up everywhere from Kmart to JayJays to Typo. The Marvel cinematic universe has confirmed 11 movies to be released in the next five years. DC Comics is also working on several different films set in the Batman/Superman universe. This isn’t to mention all the other studios scrambling to get a piece of this delicious comic-book cinematic-universe pie; think X-men or Fantastic Four, whose movie rights are both owned by Fox, and Spiderman who is owned by Sony.

In light of all this, here is a list of the most ridiculous and weird superheroes and villains, who at least won’t be making it onto the big screen in the next five years. But after Guardians of the Galaxy pulling off a talking racoon and a tree as main characters, anything is possible...

While DC can boast household names like Batman and Superman, and Marvel created iconic characters such as Captain America and Ironman, both of these comic-book companies have also put their name to some interesting (terrible) and bizarre heroes during their reign. First up is the DC hero, Matter-Eater Lad. It is as complex as the name suggests — he can eat any form of matter at high speeds. The DC Wikia says that while it might sound like a useless power, it’s an unstoppable force “when confined”.

Originally created in 1962, Matter-Eater Lad is from the planet Bismoll. His backstory explains that all food on Bismoll was inedible so his species developed the ability to eat absolutely anything and everything in order to survive. He can even eat indestructible matter. So, if he and Superman got in a fight, he would, in theory, be able to just consume him. Cool?

Oh, and, of course, don’t forget his sexy female counterpart, Calorie Queen. Oh, the implications of that name.

I bet no one could have guessed she was created in the 70s. Over in the Marvel universe, we have Flat Man. No, we’re not talking about the recently retired real-life, Christchurch-based hero; we’re talking about someone with the super-powers of “flat body”, “elasticity” and “origami shapeshifting”. He also has the added ability of, if he stands at just the right angle, appearing invisible.

There’s not much more to explain about this hero — his abilities really speak for themselves. Shark Girl is a mutant whose abilities didn’t manifest until later in life. She found herself craving more and more fish before eventually discovering she had the ability to transform into a shark, as well as various transitional forms such as a human body with a shark head. Shark Girl is a recent addition to the Marvel universe, first appearing in late 2012. It’s great to see that the Marvel creators haven’t started to run out of good material... Bird-Brain is a quirky little fellow who was originally created by mad scientist Ani-Mator to be an “Ani-Mate” — a mutant slave to humankind. Initially known as Bird-Boy, he escaped from the slavery and torture inflicted on him by Ani-Mator. Eventually he returned to rescue other Ani-Mates and mentored them into knowing what it means to be human.

He is a human–bird hybrid, and as such his powers are his wings and his claw hands and feet. The best super abilities!. Whizzer (Robert Frank) is a hero from the Captain America era of comic books, first appearing in 1941. The strangest aspect of this guy is the origin of his power. He’s more or less Marvel’s version of the Flash — he moves at super-human speed. When he was a boy, his scientist father took him on an expedition in the African bush (as you do) and Robert was bitten by a cobra. Luckily, a mongoose showed up and killed the cobra, dying in the process. Robert’s father remembered an old wives’ tale about mongoose blood and injected it into his son. The father died of a heart attack, but Robert himself survived and had the added bonus of super speed. Yay!

Who knew mongoose blood had such wonderful healing/super-powered properties? This classic DC hero literally just expands at will and then bounces around like a ball. He probably possesses one of the most pointless super-powers, but, hey, that’s still more than I’ve got. And to be fair, I know I would absolutely pay good money to see a movie about Bouncing Boy facing the Marvel villain, Eye Scream (don’t you worry; I’ll get to him later).

Honestly, though, who thought this was a good idea? He’s my favourite terrible superhero because of his origin story. He discovered his power one night when he was enjoying a hot and heavy make-out session with a girl on a beach and accidentally vomited on her face. She survived the ordeal, but suffered a severely burned face. Zeitgeist continued to have nightmares about this experience later in life — giving him his very own tragic backstory of sorts, even if it’s ridiculous and involves super-vomit.

I’m actually surprised she managed to survive the super-vom, as it’s supposed to be able to burn through 10cm-thick steel in a matter of 30 seconds. Surely someone’s head is even less resilient?

Regardless, I implore someone out there to please make a B-list vomit-hero movie. Obviously a badass, this Marvel hero has a psychic link with his skateboard. He has no specific powers apart from this connection. El Guapo cheated on his girlfriend, and his skateboard freaked out and beat the crap out of him for it. Furthermore, if he is separated from his skateboard for a long period of time, his health begins to deteriorate. Really, he’s nothing without his skateboard.

El Guapo is dead, impaled through the heart by his beloved skateboard after losing control of it. Irony?

This creepy ass dude is covered head to toe in eyeballs. Kudos for accurate naming effort there, Marvel. More than anything else, this particular hero mainly looks creepy or weird, and the concept is a little out there, but as far as powers go, he’s actually pretty interesting. His many eyes give him a whole lot of powers in terms of perception: he can perceive people’s personality traits and emotions, as well as see magical and electrical waves. On top of all that, he’s also got the ability to see through illusions and disguises.

In saying all that, while those powers are pretty cool, I would definitely not be keen to be covered in eyeballs. Erugh, gross.

Next up are DC and Marvel’s worst villains, showcasing exactly why these two particular comic-book studios are so highly successful … Or not. It’s a mystery as to how these villains were ever even remotely taken seriously. Some super-villain and hero names obviously have a lot of thought put into them, others are at least cool or clever in some way, and then there are the Armless Tiger Man-type characters, where you get everything you would expect and nothing more, nothing less.

Armless Tiger Man is indeed, armless, tiger-y and a man. Eric Hertz, the man behind the, uh, tiger face, is a German factory worker. In an accident, his arms were torn off. He was then taught how to operate machinery with only his feet and mouth. Understandably, Eric developed something of a hatred for machinery, trained himself up and began using his mad new skills to destroy machines. The Nazis captured him and sent him off to America to, well, stomp on their defence efforts.

Can you tell he is another one of those 1940’s comic-book characters? The aforementioned Eye Scream, finally! This villain was made to feel ridiculous by the X-Men because of their superior powers. And I’m not even being power-ist here, their powers are definitely superior. Eye Scream has the ability to turn into ice cream. Not only that! The Marvel Wikia reports that it can be any flavour ice cream, including banana split.

He had intended to destroy the X-Men, but failed after being trapped in ice-cream form through being frozen. The villain has not been seen again in Marvel comics (thank god). Hypno-Hustler, along with his band The Mercy Killers, hypnotises people through their music in order to steal their valuables. He first discovered his ability to do this when he was caught stealing from a club owner’s safe — he was able to hypnotise his way out of the sticky situation.

This is another of those situations where his name pretty much spells out everything you need to know about the character, but at the same time it’s still better than Armless Tiger Man. At least there’s some alliteration. This entire character is one big dick joke. Due to an inferiority complex about his junk, this guy decided to become a villain with a giant multi-purpose weapon looking suspiciously like a penis. The phrase “I think he’s compensating for something” is an understatement in this case.

His phallic codpiece has a multitude of purposes. It can be used as a cannon, fire missiles and produce a sonic attack; it also has two retractable boxing gloves amongst many other helpful “tools”.

Stilt Man is a dude who stole someone else’s technology and made himself some really, really long legs. After that he became a super-villain. His power is his stilt legs; it’s not anything inherent about him, just stolen technology.

I don’t think I fully understand why he even exists. What baffles me even more is that he, too, has a female counterpart. he’s even more useless than Stilt-Man. She’s clumsy, over the top and is defeated by Deadpool when he lifts a manhole cover leading to a sewer. One of her legs falls down the hole, causing her to lose balance and collapse. Her response to this was to just sit there and cry.

Lady Stilt-Man was intended as a jab at the phenomenon of creating female versions of male characters. It makes sense, considering her terrible name. But it’s good to know that while the Marvel writers aren’t always coming up with the greatest concepts, at least they still have a struggling sense of humour.