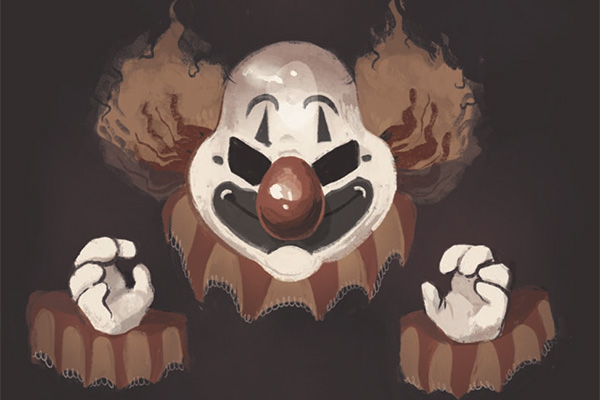 “If it’s a huge whitetail, I’ll get a ringing in my ear and freeze,” said Katelyn Hill, asked about her arachnophobia. Heard that one before? What about coulrophobia? There’s a good chance you have a minor form of it – a fear of clowns.

Napoleon Bonaparte had ailurophobia, a fear of cats. Hitler, Mussolini and Julius Caesar also feared cats. Sigmund Freud had a fear of weapons, which was said to be a sign of retarded sexual and emotional maturity. Richard Nixon, the thirty-fourth president of the United States, had an excessive fear of hospitals, believing that if he ever went in, he would never come out. You can find endless numbers of famous people who are phobic of something, which inevitably increases the popularity of the particular fears.

There are some bizarre-sounding phobias on the master list. Have you ever heard of alliumphobia — a fear of garlic? Chromophobia — fear of colours? Thaasophobia — fear of sitting? Hedonophobia — fear of feeling pleasure? Papyrophobia — fear of paper? It quickly becomes apparent that these could have been made up by quick-thinking people in desperate situations. A non-phobic person losing an argument could go into a fit in order to stop listening and later claim he has allodoxaphobia, a fear of opinions. Your mum might claim to have ataxophobia, a fear of disorder or untidiness when she tells you to vacuum your room. You could tell your lecturer that you can’t spend $80 on a textbook because you have bibliophobia, a fear of books. Then again, anything can be neatly explained away by the top dog polyphobia — fear of many things.

For those with phobias, it usually means to have a chronic or irrational fear of something. 11 per cent of people will experience a phobia at some point in their lifetime. There are two main categories of phobia; social and specific. Social phobia is directly associated with Social Anxiety disorder (SAD) and the people suffering experience extreme fear and discomfort in social situations of any kind. People suffering from this phobia also tend to be very self-conscious and a lot of the fear stems from stress about possible humiliation and scrutiny from other people. This is the most common type of anxiety, and is normally developed after puberty.

On the other hand, specific phobia is the unreasonable fear of a specific object or situation and is related directly to the object or situation itself. By unreasonable, we mean that the fear the person feels is unjustified – ie. Looking at a clown will not actually hurt you. When people are placed in situations where they have to directly face their phobia, they may experience a feeling of losing control, panic and even fainting. Specific phobias will often develop at a much younger age than social phobia and are generally what we are referring to when we’re scared of something.

Senior Lecturer Dr Dione Healey from the University of Otago’s Clinical Psychology Department described the DSM (Diagnostic and Statistical Manual of Mental Disorders) criteria that clinical psychologists and psychiatrists use to make a diagnosis for this particular form of anxiety. There are five key criteria:

The DSM criteria also state that the symptoms for all ages must last for at least six months. Healey confirmed that people can have phobias about absolutely anything, and a friend of hers even has a severe mayonnaise phobia.

21-year-old Katelyn Hill knows that the fear of spiders is called arachnophobia, although it’s not a label she puts on herself. She says her “phobia” has gotten worse as she’s grown older, because now she’s too old to call for mum to come and get them, and now she lives in a cold Dunedin flat, she seems them more often. Despite the anxiety, she says it has not really limited her life in a way that other phobias could. How do we know Katelyn has a phobia instead of just a fear? She said that she gets a ringing in her right ear whenever she sees a spider, and if no one gets rid of it for her she will wonder where it is for hours. This fits in with the “immediate anxiety response” in the DSM criteria, as well as having “marked distress”. She knows she is not alone, and has never felt the need to be officially diagnosed by a professional — It’s probably not too hard to notice when you and your eight-legged friend don’t get along.

55-year-old Sandra Gordge has acrophobia, a fear of heights. She didn’t realise it had this label and believes that it developed when she fell down the stairs as a toddler, needing stitches above one eye. Since then, she has avoided heights. Sandra avoids theme-park rides, ferris wheels and cable cars, as expected, but she also struggles on stairs and escalators, having to hold on to the handrail and take her time unless there’s a lift she can use. Otherwise, she endures the flight of stairs with “intense anxiety and stress”. She feels the limitations of her “phobia” as she can’t experience everything and has missed out on climbing Sacre Coeur in Paris and the Mayan ruins in Guatemala when travelling. Sandra believes she is getting better at managing her fear as she is more aware of it and has become more confident with facing her fear over time.

Searching for a characteristic that further matched the DSM “out-of-proportion fear” specification, Sandra noted, “I can be on stairs walking normally and suddenly be overtaken by fear and then find it difficult to actually move. I have to concentrate really hard just to complete them, particularly if there is no handrail.” She doesn’t believe she is alone and thinks that everyone must have a phobia of something, and refers to a friend of hers who she knows is scared of butterflies.

Allana Cato, a 20-year-old with a fear of injections, believes she was born with her phobia. Her dad is also squeamish around needles so she thinks it must run in the family. Although she was not aware that her fear of needles and injections is called trypanophobia, she is aware of how much it limits her life in small ways — not being able to give blood frustrates her, and getting a blood test or injection is a much bigger deal than it needs to be. She is embarrassed to make a scene with “tears and thrashing” when the nurse tries to hold her arm, “which isn’t fun for anyone.” A strong fear of veins goes hand in hand with her fear of needles and injections, and she has always avoided anything to do with veins: even just talking about them makes her feel weak. She says that at a recent blood test, she applied numbing cream to prevent the trauma but was still sweating, crying and shaking at the ordeal, even though “it didn’t hurt that much.”

81-year-old Julie Grenfell described her claustrobia, or fear of being trapped in small spaces. Once, she found herself trapped in a top bunk “virtually a shelf approximately 40cm from the ceiling” in a crowded mountain hut, experiencing “what I began to realise was a level of anxiety increasing to panic.” She doesn’t believe her phobia has grown over time, as she learned quickly to avoid small spaces that may give her the same ‘trapped’ sensation — avoiding the phobic situation as the DSM criteria notes. She believes that the term phobia is “a somewhat loosely used label” that has perhaps become slang for any form of fear.

When one doesn’t have a phobia, the story is quite different. Ben Butt, who doesn’t describe a particular phobia, believes “all people are born with fear but it takes certain experiences in one’s life to turn that fear into crippling terror.” He sympathises with people “to an extent”, explaining that it’s understandable to have a “deep fear of spiders or snakes or tall heights” but that phobias such as “a fear of flowers or fear of bathing seem like they’ve been made for the special snowflake generation.” He also said that he lacks sympathy for those people with phobias who don’t get treated, as this impedes “both their own lives and those of their loved ones.” He thinks that having over 500 documented phobias is excessive but does believe that a phobia can be more than “just a fear” and can end up controlling your life and restrict daily activity, which “could lead to an even more introverted and withdrawn individual.”

“I would say that a large majority of people with phobias have too much time on their hands and WebMD saved to their favourites bar.”

Fear is a natural human response to sensing danger, and is one of the basic human emotions and functions like an instinct. However, intense fear of a specific thing is often a learned behavior. In 1919, psychologist John B. Watson did a completely unethical experiment on a young boy to show how fear is learned and is actually conditioned through our experiences. This is known as classical conditioning. The boy, called ‘Little Albert’ was shown many animals, none of which he feared. However, for the experiment, every time Albert was exposed to the rat, Watson made a loud sound by striking a steel bar with a hammer, which obviously scared the boy. After several repetitions, the child was then conditioned to be afraid of the very sight of the rat. He had been conditioned to be afraid of the rat. This demonstrates how exposure to a traumatic experience triggers the fear or phobia in childhood, which can follow you for the rest of your life.

Self-diagnosis is more common than going to a doctor about a fear or phobia, as it would rarely occur to someone that professional help should be sought for, what is sometimes, a very common feeling.

Doctors can give medication to patients if they feel it is necessary, but there are alternative cures to phobias that can work, depending on the person. An exposure treatment called flooding works by immersing the person in the fear long enough for the fear to fade away. Counter-conditioning or systematic desensitisation trains phobic people to relax in the tense situation instead of feeling scared. In another method, modelling is used, where phobic people observe non-phobic people in their feared environment. Mildly phobic people tend to avoid the situations that make them anxious, and this is enough for them to cope.

There are also hundreds of self-help tips, telling phobic people to face their fears, to challenge their own negative reactions and to relax in the tense situation. Individuals may have enough discipline or self-belief to achieve this on their own, but help can be worth it.

Hypnosis can be an effective treatment for a lot of people by accessing the underlying cause of the phobia and neutralising a person’s negative response. In hypnosis, the brainwaves slow down and the subconscious mind is engaged: it is a focused state of relaxation. New associations can be formed when positive thoughts are introduced, meaning that a person can develop a different, healthier response to the phobia trigger.

The best way to check whether you have a proper phobia is to use the DSM criteria; from this you can also see how badly it is affecting your life and decide whether or not you want to do something about it. Doctors can talk through your symptoms and determine whether your fear is serious enough to be a phobia, and then offer you appropriate solutions. Healey specifically recommends cognitive behaviour therapy as first-line treatment. However, if you have a phobia strong enough to meet the DSM criteria, you probably already know about it by now. Unless you are scientiapantophobic — scared of knowing.
This article first appeared in Issue 2, 2015.
Posted 6:26pm Sunday 1st March 2015 by Kirsty Gordge.