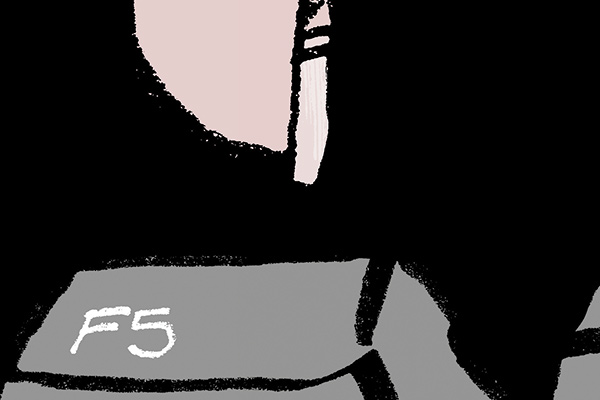 Forget TV and print, the place to be popular right now is the Internet. It’s not just for young people anymore, either: my parents use it to research, read, form friendships, and campaign for the Labour Party; and they’re, like, 100. Unlike the rest of my family, I am singularly terrible at being popular on the Internet. One sister takes well-liked selfies, and the other runs a highly successful anime-and-boy band Tumblr blog. I, on the other hand, have nearly 300 Facebook friends. This makes me one-quarter as popular as Don Brash. I had to change this. I had to go viral.

“Going viral” is the apex of Internet success: your idea is known to millions, perhaps billions, of people around the world, all staring into their computer boxes and sharing your ice challenge video, advice animal meme, or blog post. The constant sharing and clicking is occasionally deemed “mindless” by detractors, AKA Mitt Romney fans after a Mitt-based parody of Gangnam Style went viral in 2012, but Internet memes are one of the biggest sources of LOLs.

LOLing is one of the most pure forms of emotion, and to create it in someone is a beautiful thing. I didn’t just want to be an internet celebrity, I was going to make people smile. This is how to be remembered, I thought, and plunged into the world of being a first-time poster.

One of the biggest Tumblogs over the past year has been Reasons My Son is Crying. It takes something that is apparently cute – children – and makes it ugly. These children are all crying, for completely ridiculous reasons. Greg Pembroke, father of two, didn’t expect people to relate to it as much as they did: “I think every parent experiences meltdowns and I was trying to have a little fun with it,” he said, but he reached a much broader crowd than just other parents in the same boat: he ended up with millions of hits, and guest spots on radio shows.

This blog, much more popular than its sister site Reasons My Son is Smiling, strikes the perfect balance between cute and upsetting; it’s just preposterous. It could also be cool with the young set because of the relief many young adults feel when they see it and realise how much they’ve improved over the years.

Inspired by this blog and similar hits, such as Lesbians That Look Like Justin Bieber and Perez Hamilton, I delved into the world of themed blogging. Using what my MART330 class calls “bisociation,” I merged two different sides of Tumblr into one, just like Reasons: I created horrorexercises.tumblr.com. Horror Exercises takes the idea of “fitspiration” and merges it with worship and fear of the occult.

I used stock photographs of people demonstrating an exercise move, e.g. lunges, and gave them new titles, like “Satan’s Deadlift,” and descriptions to match.

By the end of the day, I had four followers. That’s twice as many as my real Tumblog, which I’ve had for months – a success! It’s harder to get things out there on Tumblr, unless you want to go ahead and tag all your stuff with #softgrunge. Making a name for yourself elsewhere, and then moving to the site, could be better: both Barack Obama and the restaurant chain Denny’s did it that way, and they’re very cool on the Internet.

Internet memes originated in dance. Well, kind of. Two of the earliest examples of something going viral on the Internet were gifs: a dancing baby; and the Hamster Dance. Back in the days of dial-up, these were the only reason the Internet had meaning; well, these and online doll-makers. My parents would willingly get off the phone just to watch the hamster dance, and a few years later we’d all crowd around the family desktop again to watch “Badger Badger Badger.”

Cute animals, then, have been around since the beginning of the social internet; cat memes were born early on from, legend says, the family emails of a mischevious witch deep in some German woods. Icanhazcheezburger was the most famous site for cats, and then dogs, and then different types of cat, and then pictures of other things, like Boromir with text; the single-frame, picture + text meme had arrived!

I chose to use First World Problems, because I could draw on my real-life experiences. I could never have used Foul Bachelorette Frog for that very reason; it’s too distant from my lavender-scented, organic lemon-buying reality. I went through the day waiting for something mildly frustrating to happen, and at dinnertime it struck.

I was mid-way through a scrumptious meal of cod on a light spinach orzo – it was Tuesday, so nothing too heavy – and I reached for my glass of Sav. It wasn’t nearly singeing my manicure on the tealights that frightened me; no, it was the instant when I realised that the coolness of the wine would take away the comfortable mouth warmth I’d built up. Would the next bite of fish be disgustingly tepid? I’m not ashamed to tell you that I was very afraid. I had to make a meme about this.
I thought this meme would make me look like I was in touch with the people, just like David Cunliffe. Disappointingly, it only got nine upvotes on Reddit, a website I joined expressly for this exercise. Memes like this have been used to comment on social discord and civil wars, so I thought I would have been more relatable. Apparently not. I felt like Paula Bennett; I was lying to myself. I am not in touch with the common person. I received one comment, saying it was worse when you brush your teeth before drinking orange juice. Who does that? Everyone knows that’s a stupid idea. You’re an idiot, /u/Naphthalocyanine.

In 2012, 16,000 linked Google computer processors analysed thumbnail images from more than ten billion YouTube videos. From this, they invented the concept of the domestic housecat. I truly believe that there is not a single person online who has not enjoyed at least one cat meme. Even if you usually hate them, there will be one that gets you. Cats check every possible box: they’re cute, they’re evil, and they can do tricks. The Internet cannot get enough of cats, so I needed one.

I knew of a beautiful ginger cat called Indy, who was so docile you might think she’d been lobotomised. Her owner was just as relaxed, and piled the ends of bread loaves all over her cat and took a photo, just for the Internet. I uploaded this picture to Reddit with the title, “cat looks weird because it’s inbred.”

Indy was a smash hit. She made me the coolest I have ever been. The post received 3405 points in the end, and more than 500 comments linking me to /r/dadjokes or making bread puns. Indy got to the front page, and I got gilded! I’m not totally sure what that means, but someone gave me some gold. I haven’t figured out how to print it yet.

A good portion of the comments actually made me feel like I’d contributed to humanity: things like, “I laughed so ducking hard. Thanks OP. It made my day,” “I laughed harder than I should have … No regrets!” and “Lol get it guys the cat is literally in bread. Classic.” I had brought LOLs into the world. I affected people IRL and made their lives better, even if it was just for a moment.

It was human words that began the trip down funny lane for most, but the picture of Indy, all furry dissatisfaction and fluffiness, sold it. She wasn’t hurt at all in the making of this meme, and likely has a great career ahead making other uncool humans popular. I would recommend her to Judith Collins.

Riding high on my success, I tried my hand at the text screenshots trend. People have been taking pictures of iPhone text conversations ever since autocorrect sprang into existence. They’re aesthetically pleasing and an insight into someone’s personal life, whether they’re found on Texts From Last Night or Texts From Dog.

I wasn’t going to fake a conversation; people would see through that as quickly as they saw through my Runescape bot. None of my conversations were organically very funny, but I did find one I could play for laughs: a very sweet text from my spelling-impaired partner. I posted a query on Reddit: “My boyfriend can’t even spell ‘radiant,’ should I break up with him?” It linked to a screenshot of the text:

My theory was that the sentimental message juxtaposed with an extremely harsh consequence would be funny. I was wrong. It currently has 0 points, and 12 comments, all of which criticise either me or him. It turns out that on the Internet, or at least Reddit, no one likes being reminded of relationships. The only way to be a successful internet couple, it seems, is to be a lithe, hipster duo filtered through Instagram and tagged as #pastelgrunge on Tumblr. Sure, don’t date people you meet on the Internet, but more importantly: don’t tell people on the Internet you’re dating. It gets them down.

I wish it weren’t so easy to prove that the key to Internet success is pictures of cats. I wanted it to be more complicated than that; I wanted the Tumblog to take off. Why was it the in-bread cat? How are those animals so goddamn universal? Someone actually paid money to reward my (Indy’s) hard work with some virtual bling (gold). After years of creating, some people will never make the front page of Reddit; and I did it with a cat. It feels like selling out. I should have fully sold myself and done nudes. I could have done the ice challenge, but no one challenged me. Also, I wouldn’t have done it.

Even though I’m less than impressed at how I got to the front page of Reddit, it’s an achievement: I didn’t manage to go viral, but I was at least seen by thousands, and they liked it. I’d love to use my experiences to posit that authenticity online doesn’t succeed, but blogs like the ones I tried to mimic destroy that notion. I likely failed because of posting times outside those of the U.S., poor tagging, and being way too niche.

For those in power – or, moreover, for those who would like to be in power – the Internet is increasingly the place to make yourself heard. It’s not just about the youth vote anymore; the average Reddit user is 25–34, with a broad reach above and below that. Tumblr, too, caters for a range nearly as wide; and Twitter takes all types. The number of people available for influencing out there is phenomenal, but it will take a lot more than The Alliance Party’s 2011 election message video to engage with them.

To be popular online, you need to either: know the customs, a la Anna Kendrick; hire people who know the customs, a la Barack Obama; or be totally open about not knowing what’s going on, like Jennifer Lawrence. A politician can best get down with the youth – and middle-aged – by answering Reddit AMAs, having live Twitter Q&A sessions, and having a Tumblr ask box.

Like me, you don’t have to go viral to be influential. You can simply plant an idea, like universal healthcare or a breaded cat. Someone could reblog or repost that idea, spread it, and send it out into cyberspace to be admired, criticised, and LOLd at. I’ll be blunt: unless you’ve garnished your idea with a healthy dose of net-friendliness, your idea will be ignored.

So start a blog, like Reasons My Wife Is Unemployed, use dog-shaming to talk about poverty, or get a Philosoraptor to ponder gender inequality. Even the most criticised memes have to travel the right roads to get seen at all.
This article first appeared in Issue 23, 2014.
Posted 4:38pm Sunday 14th September 2014 by Josie Adams.