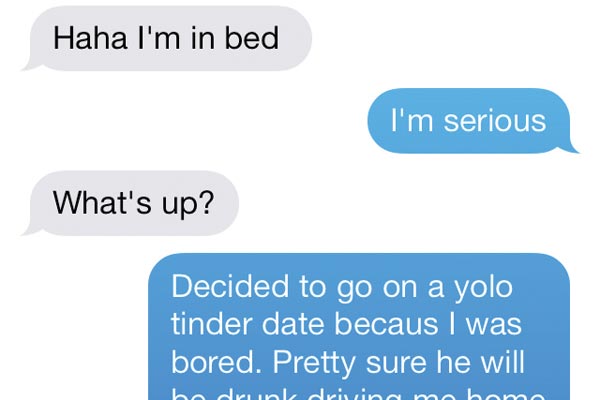 That one time I got a Tinder date to rescue me from another Tinder date.

People always ask, “aren’t you afraid you’ll meet creeps or douche-bags on Tinder?” To which I always say, “I haven’t so far and I’ve been on more Tinder dates than I care to remember.”

My time had clearly come.

Remember when your parents told you to forget about people’s feelings and your own inhibitions when it comes to your own personal safety, and when you need to get out, you get out by any means? Here is a story that will make my parents proud.

Let’s call him James. Because that was his name.

So James had a great face. Not going to lie, his Tinder profile suggested he had a great bod too (not that I care much about what’s below the brain, or anything). His text chat was reasonable and he seemed like a nice guy. He had a psychology degree after all; he couldn’t be too stupid. We arranged to go out for dessert one Saturday night.

Here is basically a guide on what not to do on a Tinder date.

He starts off by being half an hour late. Then he tells me he is a minute away from my house and asks me to wait outside, warning me his car is kind of noisy. So I go outside in the pouring rain. Five minutes later he turns up in the most
obnoxiously loud car and insists on tooting even though I am standing right there. Come on, dude. I live in suburbia – kids and cats are trying to sleep here.

I should have gotten out of the car straight away. Behind the wheel of this ridiculous vehicle he is sitting there with a beer in hand (to calm the nerves, apparently). I tried to inform him that this was an illegal activity. He was like, “nah, I’m all sweet,” (as he fails to keep within the road markings).

Our car conversation consisted of him telling me how after studying psychology he decided to just stop thinking. As if the empty stubbie of Heineken wasn’t enough of a warning sign.

At 27, this was his second ever date. Like, ever. Apparently the first date didn’t go so well – he got too drunk (seriously, where were my warning bells?).

We got to our destination and as we walked to the place he tells me that he occasionally smokes and asks if this would be okay. Assuming he meant occasionally when he drank, I said no, not at all. Next thing I know he disappears outside to light up, for which he gets told off as it was a non-smoking area. Then, rather than ordering ice cream, he gets a beer. Dude, aren’t you, like, driving? His response being, “nah, I’m under the limit.”

We sit down briefly. He throws his oversized puffer jacket on the ground, which the waitress then picks off the walkway. It was embarrassing considering we were in a rather nice Saint Heliers establishment. He then felt the need to inform me that he has had a DUI and that drink driving used to be a thing he did, but not anymore. He now only drinks enough so that he is just under the limit. The idea of him losing control of his gas guzzling noise machine, especially in this slippery weather, taking out another car and potentially killing someone, doesn’t seem to occur to him. Apparently that would never happen because he would “drive real slow.” Face-palm.

We walk along the waterfront. I stare intently, focused on my ice cream. He lights up again. He informs me that he doesn’t have an addictive personality and that if you quit smoking by the age of 30 you’ll be sweet: “your lungs will be pink again.” I choked on a spoonful of ice cream at this point. Apparently smoking and drinking isn’t bad for you. Face-palm.

We continue to walk along in the dark. He asks if I would mind if he jumped behind a tree to pee (instead of using the public toilets 200 metres away). Quite bluntly I informed him that I did mind and that if he did that I would be forced to write a piece about him. He laughed (not realising that I was totally serious).

The generic Tinder chat continued. His hobbies included drinking, getting drunk, going to the gym and eating lots of meat. He reassured me that he wasn’t one of those drunk dicks that get into fights. Well, in that case ...

I really didn’t believe him when he told me he hadn’t been drinking prior to picking me up.

As we walked I randomly got sent a picture of this other guy I met on Tinder (who I had dated a couple of times and who had recently been too busy to text me) with his cat. I don’t know why I did what I did but it was somewhat instinctive. I was a good 20-minute drive from home and it was raining. I called for help.

Ignore the terrible spelling. I was panic texting.

Whist I was frantically stealth texting this guy, James decided that we should sit down and get another beer (I am currently on dry July so this activity did not excite me in the least).

I really just cannot communicate to you how bad some of the things that were coming out of his mouth were. You know when you see an attractive person but with each word they say you wish they would close their mouth? Even if I was in a bar, totally wasted, I still never would have chatted to him as long as I did. I kind of wish I was wasted, it would have made the whole experience less painful. It was now that I was certain that I had made the right decision in asking for a rescue, especially as his glass became progressively emptier.

It was when my rescuer’s Beemer pulled up just outside the place we were sitting that I abruptly got up. I hadn’t given this guy any warning of my intended departure. His poor face didn’t know what was happening. I told him the truth. I told him that I wasn’t comfortable being with him or with him driving me home and that I really needed to go. And then I left. Leaving the poor guy with a two-kilometre walk in the rain away to his car. I jumped into the Beemer like I had just robbed a bank. The fact that I was in a car with a guy who had otherwise ignored me for the last two weeks was the least of my worries. I was just thankful to be out and safely on my way home. The potential awkwardness was just a minor afterthought 20 minutes later I was home. Not surprisingly, the 20 minutes of chat in the car was the best I’d had all night. Intelligence really is way more attractive. Kind of gutted he had places to be.

My respect for my rescuer increased significantly that night. I had written him off as a guy who suffered from a severe case of “only child syndrome” (or “arrogant dick disease” or “Remuera prick phenomenon”) who stopped texting me because I didn’t want to take my pants off. But a guy who will go out of his way at 10.30pm on a Saturday to make sure a woman gets home safe reassures me that chivalry isn’t dead after all.

I am just gutted I wasted a perfectly good cake-baking night on this loser. I have learnt a valuable lesson about meeting strangers, and will balance my interest and curiosity in engaging with this “sex” I have heard so much about, with the requisite caution in the future.
This article first appeared in Issue 18, 2014.
Posted 9:43pm Sunday 3rd August 2014 by Sophie Edmonds.