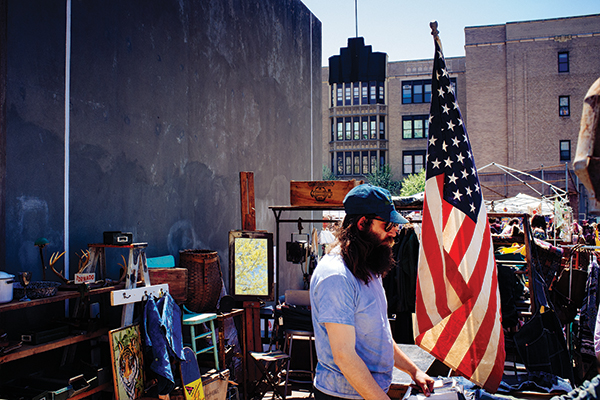 For three weeks earlier this year I travelled across the United States of America. This encompassed the Coachella Music Festival, most of the western seaboard in a frantic 72-hour driving mission, a pit stop in to see old friends in Kansas City, and an epic eight-day adventure in New York City. America is a bizarre mixture of the backwards, the desolate and the high tech; a combination that makes for some strange travel experiences. People clamour in sprawling cities, while the countryside can be devoid of anything but the dust and grass. These are some of the experiences, places and people I chose to capture in this frantic whirlwind of fast food, travel, sand, debacles and cocktails. Sunset in the desert camp on the last night of the Coachella Music Festival. A return to Westport, Kansas City and our penchant for picking up artifacts from
the street. 36 hours after hitting American soil I was in downtown LA, and thrust straight into a street photographer’s paradise. Living next to the tourist mecca that is NYC’s High Line means this dude must get photographed daily. A 48-hour, tri-state driving mission pit stop for durries and coffee at 3am. Somewhere / nowhere, California. Getting lost on the subway is one of the most visually amazing experiences in NYC.
This article first appeared in Issue 15, 2014.
Posted 6:52pm Sunday 13th July 2014 by Alex Lovell-Smith.