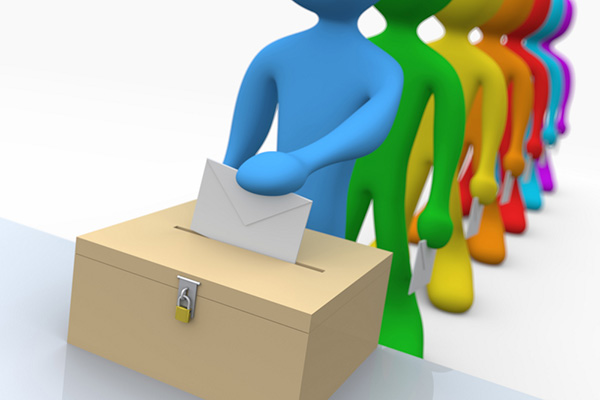 An upcoming OUSA referendum, tabled by our illustrious leader Francisco Hernandez, is seeking the change the voting system for OUSA’s future elections. The question is “Should the Otago University Students’ Association (OUSA) adopt a Single Transferable Voting (STV) system for its elections?”

Currently, OUSA uses First Past the Post (FPP), a system that’s easy to understand but also has a number of democratic shortcomings.

A direct replacement for FPP that would address many of its shortcomings is Preferential Vote (PV), sometimes known as Alternative Voting (AV). This is the system used in Australia.

STV is slightly different, because it involves electing multiple candidates at the same time, rather than holding a separate ballot for each position on the Executive. By making the question about STV, then, Hernandez is effectively suggesting that all Executive members should be general representatives, and would not be elected to specific positions (for instance, Welfare Officer or Colleges Officer).

To clarify the situation, Critic has provided a rough guide to the three main options.

Most of the time under this system, the most popular candidate wins. However, there are a number of exceptions, as the following scenario shows.

Bogan is a popular candidate, but he also polarises the electorate. You don’t want to vote for Bogan, but you can’t decide between Gooby and Rihanna. On balance you prefer Gooby, but Rihanna probably has the best chance of beating Bogan, so you vote for Rihanna instead.

Bogan ends up getting the most votes, and wins the election, but he’s some way short of an absolute majority. Most voters didn’t want Bogan, but the vote is split among the other four candidates. While you would have liked to vote for Gooby, you felt it necessary to vote for Rihanna to have the best chance of keeping Bogan out. Not only did an unpopular candidate win, but you have compromised your values in the process! 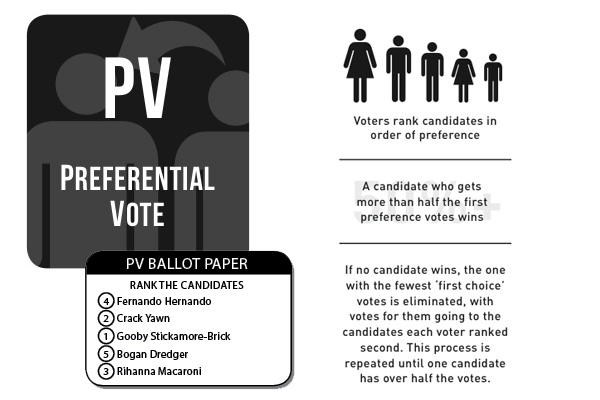 You rank your preferences from 1 to 5, although you don’t have to give a ranking to every candidate. You give your first preference vote to Gooby, second to Crack, third to Rihanna, fourth to Fernando and fifth to Bogan.

All of the first preference votes are counted first. Bogan wins the highest number of first-preference votes, but with 30 per cent is short of the majority necessary to win. Crack is second, Fernando third and Rihanna fourth. Gooby wins the lowest number of votes and is eliminated, and Gooby’s votes go to her voters’ second preferences (in your case Crack).

After Gooby is eliminated and her votes reallocated, the order is unchanged, and Bogan is still short of his majority. So Rihanna is the next to be eliminated. However, this time when Rihanna’s votes are reallocated, this pushes Crack above Bogan and above the 50 per cent mark. So Crack wins the election.

This is a fairer outcome than FPP. Although Crack had fewer first preference votes than Bogan, he had more overall support. Likewise, Crack wasn’t your first choice, but you’d still rather have him than Bogan. 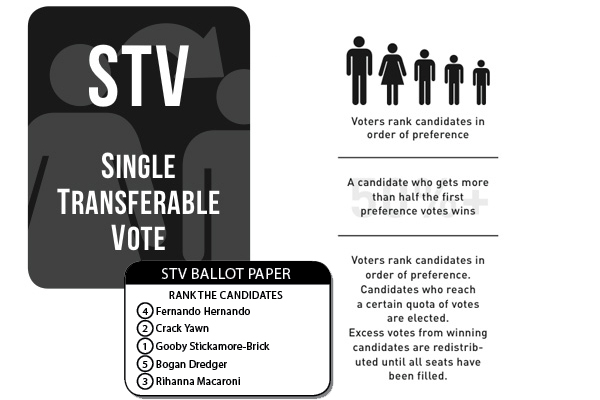 This situation is different because instead of electing just one winner, you are actually electing multiple winners (in this case three). In order to gain one of the three spots, a candidate must score above a certain quota of votes (say, 25 per cent).

You give your candidates the same ranking as before. After the first round, Bogan has 30 per cent and is the only candidate to reach the 25 per cent quota. This leaves two seats to fill.

Now for the confusing part: Bogan scored five per cent above the quota, so when his second-preference votes are distributed, they are each worth 5 ÷ 25 votes, or one-fifth of a vote.

Like PV, this is a fairer system than FPP, because the three winners are those with the strongest overall support. Bogan was a bit divisive, but he still made it due to his strong core of supporters, and Crack and Rihanna were both candidates with broader, if less enthusiastic, support.
This article first appeared in Issue 24, 2013.
Posted 1:47pm Sunday 22nd September 2013 by Staff Reporter.