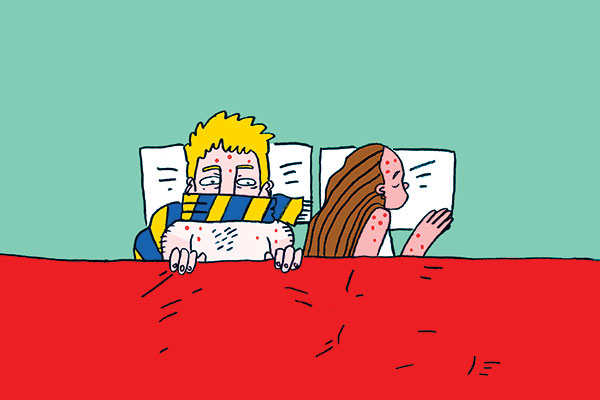 Sniffles and Sex: The Dark Truth about Student Wellbeing

In my time at university I have had an unfortunate number of conversations in which a fellow student has described their common cold as bronchitis, or has lamented over a patch of eczema while wondering which fatal illness it may be symptomatic of. Sure, these examples are a tad hyperbolic, but the fact remains that university students – and freshers in particular – are portrayed as fairly alarmist when it comes to their health and wellbeing. In a way, it’s understandable that many come off as hyperchondriacs; for a significant proportion of freshers, uni marks their first time living away from their homes and caregivers.

Now I don’t want to make freshers look like babies here, so instead, let’s look at this from a scientific perspective. Living at home allows you to pass the responsibility for your health and safety off to your (hopefully) concerned parents. At university, however, without a parent looking after you, your wellbeing is suddenly your sole responsibility. It stands to reason that – the continuation of your own life being biologically imperative – one should thus take potential signs of sickness seriously (and actual illness even more so). Hypochondria, therefore, would appear to be an effective biological reaction to the transition from home to the independence of university.

I never begrudged freshers their hypochondria, because frankly I thought it was good sense. And oh what fun I thought it would be to follow up cases of student hypochondria for Critic. I was sure that I was going to encounter nothing but hilarious anecdotes of students showing up at Student Health with the sniffles and declaring their impending doom; of halls full to the brim with freshers nursing mild hangovers and insisting they had alcohol poisoning. What I found instead, however, was the dark truth of student health and lifestyle.

In my quest to uncover the hilarious hijinks of student hypochondria I got in touch with local doctor Salil Elias. Dr Elias worked at Student Health for four years, wears a diamond stud earring, listens to heavy metal and is a highly-ranked competitive Call of Duty player (pretty badass, right?). It wasn’t long into our conversation that I began to realise what a fallacy this portrayal of “students as hypochondriacs” is. When asked whether, in his experience, students often demostrate hyperchondriac tendencies, Dr Elias told me that “I don’t believe [many] of them [do]: some are … used to being in the care of their parents, and an ailment far from home can be a scary thing. But a minority of them are hypochondriacs.”

This surprised me. I mean, if anyone would be able to testify that students were big old whingers it would be this man, and yet he was adamant that hypochondriacs were a small minority of the student population. So if students aren’t hypochondriacs, do they act differently from others when it comes to their health? According to Dr Elias, students do deal with their health differently to other groups, primarily “because there is often an attitude of wait and see, rather than seek help early. This can be influenced by financial and social issues.” The real problem, in his eyes, is less that students are overactive about their health but rather that they are not active enough.

I wondered if Dr Elias’ insights regarding financial and social issues is indeed the reason students avoid trips to the doctors. Curious, I asked a local pharmacist whether students often tried to circumvent the doctors with over-the-counter drugs. The pharmacist, however, supported Dr Elias’s observation. Students, he believed, aren’t generally hypochondriacs; if anything, they generally leave it as long as possible before seeking help, in the interests of saving money.

Dr Elias did tell me that there is one group in which hypochondriacs are not the minority: medical students. “Medical and other health science students overthink ailments, and when you add a touch of medical knowledge without clinical experience, it makes for a worrisome patient.” It turns out that hypochondria is so common in medical students that it has actually been nicknamed “Medical Student’s Disease.” The disease causes such individuals to perceive themselves – and those around them – as suffering the symptoms of illnesses they are studying.

Aside from medical students, however, it seems that students generally aren’t actually that keen to be cured at all. Rather, most are inclined to try and weather their illness instead. You don’t have to have a medical degree to know that this sort of thinking is dangerous, especially in the densely populated living situations in which students are often found – such as Residential Colleges.

I spoke to an RA at one of Otago’s many colleges about how the students – and the college itself – deals with illness. She explained to me the measures put into place to try and quell illness: “students are notified when illnesses are spreading about the hall or other halls” (one notable example being the notice passed around when Scabies was going around feral Aquinas), and “flu vaccines [are] administered on site for students.”

However, it seems that despite the colleges’ best efforts, students themselves are the problem far more often than a bacteria or virus. Dr Elias regailed me with the tale of a mass outbreak of conjunctivitis within a college; the infection spread like wildfire due to students “touching their infected eyes, and [then] elevator buttons and hand rails.”

This disregard for wellbeing would be less problematic if students lived in sterile bubbles, but we don’t. In fact, we students live in, and often subject ourselves to, some of the most unhealthy lifestyles imaginable. Dr Elias points out that “there are a wide variety of elements that act in concert and contribute to the poor mental and physical health of students, [including] poor nutrition, close-quarters living, nicotine/ alcohol/ illicit substance use and sexual promiscuity.” Adding to this daunting list are the terrible housing situations many Dunedin students endure and the fact that we live in one of the coldest cities in the country.

Although we are all sick of the Scarfie lifestlye being summarily persecuted, it does seem that many of the problems students face are related to alcohol, drugs and our all-round rock ‘n’ roll lifestyle. Every medical professional I spoke to cited financial issues as a reason students avoid the doctor, and yet the pharmacist informed me that some of the most common items she sells over the counter to students are hangover preventatives. On top of this already-expensive medication, you then also have the cost of alcohol. All up, one night out probably costs a student more than visiting (heavily-subsidised) Student Health two or even three times.

We have to ask ourselves: what are the likely consequences of students harbouring such attitudes towards health? The stresses of study (and/or near-constant partying), terrible diets (and even worse living conditions) and the near-pathological refusal to seek treatment for early-stage illnesses combine to make sickness not only prevalent, but powerful. A stressed, tired and poorly-fed body is going to be hit far harder by illness than its healthy counterpart.

More importantly, all of these factors have created a dangerous culture for our generation; a culture that doesn’t see the devastating effects that illness can have in the long run. The dismal state of students’ sexual health is a prime example. Student Health deals with this issue head-on due to the prominence of sexual health-related problems in New Zealand, and, as Dr Elias explains, because the University brings together young people from “various parts of the country and overseas, with various cultural and social restrictions lifted,” creating a recipe for the perfect sexual health storm.

Last semester, you may have received an email or letter informing you that you had been chosen to participate in the Tertiary Student Health project – a survey created by members of the University’s Department of Preventive and Social Medicine. A sample of students was randomly chosen to participate in the survey, which asked a series of questions regarding aspects of student lifestyle and culture. The survey placed great emphasis not only on alcohol consumption and sexual history, but on how these two things affected each other. Interestingly, the survey has been performed several times in Dunedin in an attempt to gauge the state of various problems (such as sexual health) and find ways to improve them. Though the results of this year’s survey have not yet been published, past surveys give us a reasonable indication of the problems we face.

An article titled “Sexual health, risks, and experiences of New Zealand university students: findings from a national cross-sectional study” was published last year in the New Zealand Medical Journal by many of the same people involved with the Tertiary Student Health project. The conclusions reached were troubling: “multiple sexual partnerships were common. Condom use was uncommon and inversely associated with [the] number of recent sexual partners. One in 20 students had or contributed to at least one unintentional pregnancy.” Overall, the authors warned that “the prevalence of risky sexual behaviours in this population raises concern about the number of students at risk of sexually transmitted infections.”

The findings of this article could well be the direct result of the nonchalant culture surrounding student health. The kinds of attitudes Dr Elias described (like “wait and see”) do not support the expectation that people who engage in promiscuous sex also have regular STI checks.

This “wait and see” approach is bad enough when applied to the common cold, but the thought of applying it to your sexual health and the health of your sexual partners is outright criminal. Literally: there have been many convictions related to the sexual irresponsibility of HIV patients, including several in New Zealand. Despite the moral reprehensibility of being nonchalant with your sexual health, it is thought that the prevalence of STIs among the University population could be substantial given that the majority of students (69 per cent) have had sex, at least 20 per cent of those have had three or more sexual partners in the last year, and only 54 per cent used a condom the last time they had sex.

All of these factors indicate that students think they are invincible. With 20,000 young people, in their physical prime, living and partying in close proximity, it is easy to understand how this could become a popular belief. The avoidance of medical care demonstrates that students think of sickness as only a temporary inconvenience.

We cannot allow allow ourselves to think this way, particularly in regard to our sexual health. Many STIs are permanent, as are another potential consequence of sex: children. The sexual health article mentioned earlier indicated that the termination rate among Otago University students was nearly 74 per cent.

I started my research on this article thinking that I was going to hear nothing but cute stories of first years treating a cough like cancer. Instead, I was confronted with the grim reality that is the current state of student health and wellbeing. We have cultivated a culture in which illness prevails because we live terribly unhealthy lifestyles and try and ignore the results. Worst of all, we have let this “wait and see” philosophy affect our sexual health. This is a philosophy that needs to be changed. A dose of hypochondria might be just what the student population needs.
This article first appeared in Issue 16, 2013.
Posted 3:59pm Sunday 21st July 2013 by Baz Macdonald.