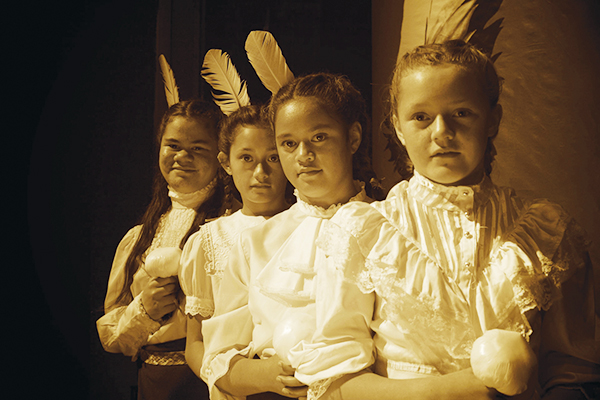 The Children of Parihaka

You see, I had no idea that the streets upon which we walk daily – High Street, Stuart Street, the tellingly-named suburb of Maori Hill, as well as the foundations of our University – were built by men from Parihaka, Taranaki (the name translates as “dancing on the cliff”).

In the 1860s, the people of the Maori settlement at Parihaka engaged in a peace protest against colonial confiscation of their land. As punishment, they were transported south as slaves, incarcerated in the caves of Andersons Bay, and forced into manual labour. Much of the original infrastructure of many New Zealand cities, including Dunedin, was built by these prisoners. The plight of Parihaka’s people is now considered one of the worst breaches of civil and human rights ever committed in New Zealand.

You’ve heard of Mahatma Gandhi, right? Apparently, Gandhi was inspired by the teachings of Parihaka leaders Te Whiti o Rongomai and his uncle Tohu Kākahi. Ghandi’s descendants, as well as those of Daisaku Ikeda and Martin Luther King Jr, continue to have a relationship with the Parihaka community, in what has become an ongoing global peace cooperative forum. Te Whiti and Tohu are now lauded worldwide as champions of passive resistance.

“Go, put your hands to the plough. Look not back. If any come with guns and swords, be not afraid. If they smite you, smite not in return. If they rend you, be not discouraged. Another will take up the good work. If evil thoughts fill the minds of the settlers, and they flee from their farms to the town as in the war of old, enter not you into their houses, touch not their goods nor their cattle. My eye is over all.” (Te Whiti to his ploughmen, June 1879)

The troubles in Taranaki began way back in the early 1840s, when English migrants from Great Britain bought inland bush country from Tarankai and Ngati Awa tribes and six ships from the Plymouth Company arrived to settle it. Between 1841 and 1843 around 1,000 settlers built New Plymouth. By 1859, however, the migrants wanted more land. They cast their eyes north-west, to a village named Warea — the home of Te Whiti and Tohu. At the time, there were more British troops in New Zealand than in any other country in the world. During what is now known as “the murderous Te Karopotinga o Taranaki” (the slaughtering of the people and the encirclement of Taranaki), Warea was seized, and around 200 Maori women, children, and elderly men fled down the coast.

The displaced villagers were vulnerable, outnumbered, and exhausted. Te Whiti and Tohu led their people into the shelter of small hillocks just south of Mt Taranaki, 55km south-west of New Plymouth. “Put down your weapons!” Te Whiti told them. “From this time forward, we will live without them. In peace shall we settle here, for good and forever, and we will call our new kainga Parihaka.”

Te Whiti and Tohu set themselves up as negotiators for the return of other lands in Taranaki that had been confiscated without proper legal basis. The leaders decided that, although there would certainly be future struggles with the Pakeha, the Maori would engage only in passive resistance. By the 1880s, Parihaka had become a sort of Maori “Parliament”; a diplomatic precinct for Maoridom. Therefore, it posed a great threat to Pakeha progress in Aotearoa.

By 1870, Parihaka was the largest Maori village in the country. Meanwhile, British Major-General Chute descended with his forces from Whanganui to the Taranaki Bight, slaughtering warriors and civilians, and destroying villages and crops.
The Nelson Examiner reported that “There were no prisoners made in these late engagements...as General Chute does not care to encumber himself with such costly luxuries.” Despite the turmoil, Parihaka managed to avoid any violence.

In 1879, European settlers advanced on the Parihaka village. Te Whiti sent out his people, adorned with white albatross feathers, to obstruct the European surveys and plough the confiscated land. Arrests were made for resistance, yet with the imprisonment of each new ploughing team, another took their place. The Native Minister John Bryce described Parihaka as “that headquarters of fanaticism and disaffection”. Parliament passed legislation which enabled the Government to hold the non-violent protesters indefinitely and without trial. As a result, hundreds of men and youths were exiled to South Island prisons, including Dunedin Gaol, sentenced for shillings’ worth of damage, and punished with hard labour. Numerous men died serving their sentence and were buried namelessly in paupers’ graves. As the resistance at Parihaka continued, so did the punishment.

Eventually, Native Affairs Minister William Rolleston signed a proclamation to invade Parihaka on 5 November 1881. An army of almost 1600 soldiers bombarded the village at dawn, only to be greeted by children who skipped, sang, and offered them food as adult villagers sat on the marae. The Riot Act was read (the Suppression of Rebellion Act 1863 defined Maori fighting for their land as rebels), and Whiti and Tohu were taken away to trail.

Many Parihaka inhabitants were expelled and dispersed throughout Taranaki without food or shelter, and the remaining residents were issued with government orders to control their movements. It took the troops two weeks to flatten the village houses, and two months to destroy the crops and kill the livestock. Wives, mothers, sisters, and daughters of the prisoners followed them south, hoping to assist their loved ones. These women often lived in poverty, and many died during their exile. A 1996 Waitangi Tribunal report summarised the events: “A vibrant and productive Maori community was destroyed, and total State control of all matters Maori, with full power over the Maori social order, was sought.”

Written records have since succeeded in erasing Parihaka from our national history. In Witi Ihimaera’s novel The Parihaka Women, he admits that “Up until the mid-1960s, there was very little mention of Parihaka at all: G.W. Rusden’s History of New Zealand (1883), James Cowan’s The New Zealand Wars (1923), and then 30 years of virtual silence until Dick Scott’s booklet, The Parihaka Story (1954), and Bernard Gadd’s 1996 article, in the Journal of the Polynesian Society.” Ihimaera goes on to express anger over the suppression of past events: “With some disgust I record that the first edition of the New Zealand Government’s Descriptive Atlas of New Zealand, published in 1959, went as far as to expunge Parihaka entirely and overprint it with a Pakeha name... I wouldn’t be surprised, therefore, if you haven’t heard of Parihaka or its remarkable history.” Paora Joseph agrees, and says that “Growing up, I wasn’t really aware of our history here in New Zealand, let alone my own [Maori] culture.” Both author and filmmaker have attempted to draw public attention to the injustice via a new tactic: the amalgamation of narrative and non-fiction.

Paora’s film tells the story of a 2006 hekoi, a “journey of memory,” taken by a group of Parihaka children who spent almost two weeks travelling by bus from Parihaka to Wellington, and then around the South Island. Wellington War Memorial, Addington Jail, and Ripapa Island in Lyttleton Harbour were key stops on the two-week bus journey to the caves at Andersons Bay in Dunedin.

The group of about 30 children, aged 5 — 12, attend Te Kura Kaupapa o Tamarongo school in the South Taranaki town of Opunake. They were accompanied by parents and teachers, including Ngapera Moeahu, Maata Wharehoka, and senior spokesman (Whaikorero) Rukutai Watene, as well as Paora, as they followed in the footsteps of their great-great grandfathers.

Though artwork, poetry, song, archival images, animation, and footage shot by the children themselves, the film provides an entertaining and eye-opening retelling of our history. The film, described as “sombre and enriching”, premiered in Wellington on 28 July, and screenings since then have consistently sold out. In response to popular demand, the Rialto is replaying the film at 7.15pm on August 20.

Paora is humble about the film’s success, and is pleased that the public are interacting with the story: “All you really want in terms of storytelling is to promote discussion. Then people will go away and read about it more, and become more involved, and make links with their own stories.” He emphasises that, as a nation, we’ve got a lot to learn from each other, and that the art of storytelling is not just to tell one story, “but to give people permission to find out their own story. What I’ve wanted to do in this instance is [give] the children a voice.”

When asked if he’ll continue making films (he also practices as a clinical psychologist), Paora is eager, yet wary. “I’d love to make more films. One of the difficulties, particularly with this film, is raising the funds. This was made on a budget of $35,000 — $40,000, but the real cost was $250,000...
What I would like to do is just make films, to be able
to do that financially, because I have got some other stories that
I’d like to tell. It’s just a matter of having the time and the
finance to do it.”

On that note, check out the crowd-gathering website www.pozible.com, and search for “Parihaka”. Paora and his team would appreciate any donation.

Meanwhile, sort out some tickets for the final Dunedin screening this month (Paora has already said that the film won’t come out as a DVD). Whether you’re already educated about the history of Parihaka or as naive as I was, it’s well worth $12.50 and 65 minutes of your life.

As Dunedin residents (even if only transiently), I believe that we’re obliged to learn at least a little about our local history. The story of Parihaka, and the kaupapa of nonviolent action articulated by Te Whiti and Tohu, has endured as a beacon of peace amongst conflict. Unfortunately, I believed that those stories belonged to past generations, and to people and politics that I couldn’t identify with. Now I realise that like any sentimental item handed down the generations, these stories are part of our inheritance, and they belong to us. With a bit of creative vision and aesthetic appreciation, people like Paora demonstrate how history, though often sad and hurtful, can be retold in ways that engage an entire nation, regardless of ancestry.