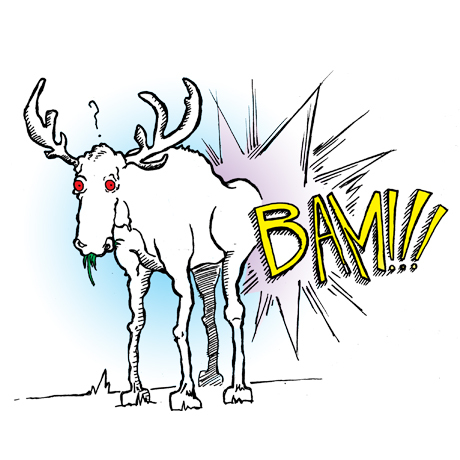 How to Fuck a Moose

You’ve done it all.  You’ve grasped a Drysdale ram by the horns and hammered away like a road worker.  You’ve dropped trou and done the nasty with squirrels, chipmunks, gophers, marmots, rabbits, hamsters - if it squeaks, you’ve been there.  You even got funky with an aardvark once when you had ‘ants’ in your pants.
And now you’re bored.  It’s all the same.  A whole world of Darwinian delights, and it leaves you cold.  Day in, day out, you can’t seem to find a critter to get your mojo humming, and you’re left - gasp - flaccid.  What’s a nature-lover to do?
I have a suggestion for you.  The ultimate test of man versus wild; the final frontier of getting your end away.  The natural selection.  I won’t hold you in suspense.  I’m not a jerk.  Let’s do it.  Let’s fuck a moose.

PREPARATION
I’m not messing around.  If you’re not serious, then get the hell out.  This is business.  Have you ever seen a moose?  I doubt it.  They are enigmatic, elusive - like Pocahontas.  You won’t see it - it will see you.  And then, also like Pocahontas, it will take you down.  It won't just kill you: it will kill the fuck out of you.  So if you want to leave a smear of anything other than brain matter on your intended beau’s antlers, you better wipe that grin off your face.  This is life or death, shitface.
You must start by training like Rocky.  This is your only hope.  Hone your body to sheer, unadulterated physical perfection.  How many chin-ups can you do?  A hundred?  That’s pathetic.  How about two thousand. Two thousand minimum, and you might just stand a chance.  We’ll see.  Remember, there is only one way to thumb-wrestle, and that is to crush your opponent’s entire goddamn fist into a bloody mash of bone and gristle.
Train your mind.  Train your spirit.  Train your flea circus.  Visualise moose.  Dream moose.  For practice, fuck a deer.  Moose are kind of like big deer.  Neither animal pluralises well.  They both have a soft spot for romance.  But the moose has an even softer spot for death.

GET THERE
Ten moose were released into Fiordland in 1910.  Forget Fiordland.  Fiordland moose are the lords of fear and death of this country.  Fiordland will eat you.  It ate Rambo.  His bones have lain in the depths of Fiordland’s forests for over a century.  And you do not even want to know what it had for dessert.  Forget Fiordland.
Let’s try Canada.  In Canada you may have a hope of chancing upon a moose slightly dazed from recently eating a grow-op out of financial solvency.  Can’t afford a plane ticket?  That’s why God gave you arms.  Swim there.  If you can’t swim to Canada, you can just forget about ever getting down and dirty with that moose, because you are without a doubt a grade-A weenie.
Canada is big.  You think it’s all maple syrup and lumberjacks?  Well yeah, but it’s a lot of maple syrup and lumberjacks.  You will have to become Frodo.  Canadian Frodo.  There is a metaphor involving the One Ring and Mount Doom.  But it becomes terminally confusing when you factor in Samwise and Smeagol.  We will not pursue it any further.
Pursue your moose.  Search Canada.  Seek, strive - and never yield.  Remain vigilant for signs of the moose.  Signs include: excrement (generous), footprints (earth-shaking), moss (licked), Canadians (gored).  An impossible task?  Consider this: ancient travellers sailed across the Pacific, pinpointing tiny spires of palm-licked rock speckled throughout an empty vastness of ocean.  How?  They watched the skies for island-nesting birds that indicated the proximity of an island.  They used their brains.  But they never fucked a moose.  You will have to use more than your brain.  You will know that you are in the presence of moose when your bowels involuntarily loosen and the smell of death seeps into the pores of your skin.

ONCE YOU ARE CLOSE
Stealth.  Absolute stealth.  You are a leaf hanging breathless from a branch.  You are a drop of water clinging to a stone.  You are Michael Jackson’s final dance move.  It will be days before you so much as blink.  Your eyes will callus and render you completely blind.  What’s your problem?  Helen Keller was blind.  Do you think it stopped her from fucking a moose?  Hell no.  She was so hardcore.
Many eons have passed.  The moose appears.  Majesty.  Pure majesty.  You are in the presence of a god of the old world.  The King of Eternity.  The Mayor of Timetofuckingdieville, population: your arse.  This is the animal that Michael Douglas would ride, if only he wasn’t pretending to be straight.
Its flank is slick with blood.  Steam pours from its iron snout.  Its eyes are cobalt, ruby, agate, emerald.  The moose crushes the earth with legs that are spears of steel, tipped with daggers.  And razor blades.  And miniature trebuchets.  The sky burns and the earth shrieks.  Death.  Pure death.  The ultimate rush, the ultimate thrill.
Did you remember your BFG?  I pray to magumbo you did.  You have exactly two seconds to raise it to your shoulders and pull the trigger before that moose is on you like jelly on lesbians.  Dead lesbians.  Don’t worry, the blast won’t kill the moose.  What an idea.  Kill a moose?  Ridiculous.  It will be startled - shocked by the mortal impudence you have shown it.  And that is all you can hope to achieve.

A WINDOW OF OPPORTUNITY APPEARS
Sieze it.  Run.  Sprint.  You are Usain Bolt.  So stop being such a slowpoke and run like you really mean it.  The distance closes - metres fly under your feet, like fatties to an all-you-can-eat, as you near the looming, monumental body.  It dwarfs you.  It is a mountain.  It is King Kong.  And you are a midget Charlie Chaplin standing next to its toe.  Swallow your fear.  Dissolve it in stomach acid for two to six hours.
Whip off your stripper pants.  Pull out your grappling hook.  Ascend the colossus.  Mount it.  There it is: the prize.  Cavernous.  The sides are as slippery as moose-licked moss.  It is red and pulsating, like your grandmother’s haemorrhoid at critical mass.  But this isn't grandma you're fucking.  At least, not today.  This is the real goddamn deal.

FUCK A MOOSE
Sublimity of sublimities.  Rapture, transcendence, euphoria.  Welcome to Eden.  The rise and fall of desire.  The implosion of passion.  Fuck a moose.

HEY MAN CONGRATS NICE ONE
You have tasted a drop of godhood.  You will live to be three hundred and sixty-four years old.  You will weep diamonds.  Babies you kiss will grow up to become Barack Obama.  Yes, all of them.  How many Obamas can the world handle?  Good question.  How many babies can you kiss?

Next week: How to Fuck a Sandworm.  You’ve been Paul Muad’dib - now it's time to become Paul Muad’dirty Motherfucker.