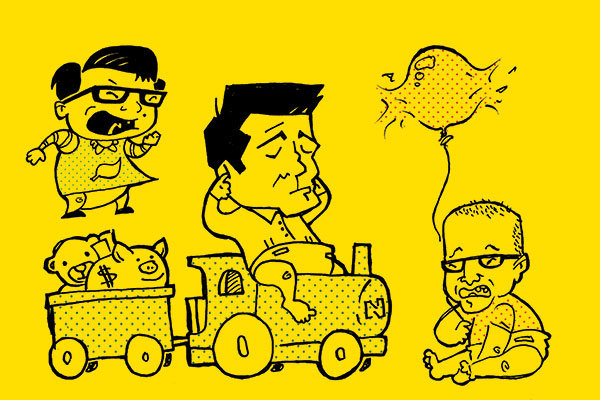 State of The Nation

Before getting started, I must admit that, as a fourth-year Politics student, assessing the National Party’s second term in government for my first feature is like a dream come true. A sad dream (and a confession likely to diminish my chances of getting laid for
a while), but a dream nonetheless.

But politics is important, goddammit. With the never-ending economic “crisis”, partial asset sales, and cuts in public services, namely education, National’s agenda is beginning to affect everybody. It is important that we start to pay attention.

I caught up with a Dunedin MP from each of the leading political parties – Michael Woodhouse of National, David Clark of Labour, and Metiria Turei, co-leader of the Green Party – to shed some light on the state of our nation.

A BRIGHTER FUTURE FOR NATIONAL?

National currently sits at a 45.8% approval rating in the polls, their lowest result since the November elections. If an election were held today, a Labour-Green-Mana coalition could potentially form a government if they were able to convince the Maori Party to change sides.

Michael Woodhouse is not fazed. He believes National’s second term is in fact going “very, very well.” Woodhouse argues that National “is delivering on the things we campaigned on…fiscal policy and economic growth, partial float of state assets, the welfare reform agenda, and the dairy industry reform.”

So is the National government really in a strong position? According to Dr. Bryce Edwards, a lecturer in politics at Otago, “No, I think the government is in a really weak position at the moment… we are just seeing so much political mismanagement from the Prime Minister and cabinet ministers. I think the tide has really turned.” Unsurprisingly, Clark and Turei agree. Says Clark, “The mood is changing. It is vastly different to what it was six months ago. It started with the teapot tape, the ACC scandal, Sky City, education, and the constant asset sales issues.” Metiria Turei believes there is an increasing disconnect between National’s media spin and what they are actually doing. “The government keeps saying nice things, and doing the complete opposite.”

Leading up to the November 2011 election National campaigned on an economic growth strategy that included the “partial sale” of certain state assets. There is much debate as to whether the sales will actually help our economy and whether the assets will stay in New Zealand hands. While National has never looked like backing down, public opposition is mounting. Labour, the Green Party, New Zealand First, and Mana are working together to gather signatures for a referendum.

Parliament passed legislation enabling the sales by a one-vote majority on June 26, and Woodhouse believes the campaign is going well. “We started talking about it in February 2011…it is a piece of a broader fiscal and economic policy that we see as important.” Citing the election result as their mandate, National is looking to have the Mighty River power company sold before the year is out. Woodhouse emphasises that a referendum on the matter will not sway National’s ambitions.

Clark and Turei disagree. Clark believes a referendum will ensure National’s demise, and sees asset sales as indicative of National’s divisive agenda. “It will be of interest to National’s support base…but doesn’t seem to be of interest to most New Zealanders, middle New Zealanders who miss out.” Turei is just as opposed, and believes that “we need to keep those state assets in NZ hands for economic and environmental reasons”.

IS ECONOMIC GROWTH EVERYTHING?

Ever since that mother of all economic crises came along, politicians seem to want to talk about nothing other than economics and growth.

Woodhouse is no different. He believes that “the economic growth agenda is the single most important thing facing the government at the moment.” He emphasises that we need to get our economy back into surplus and boost the “Crown coffers” quickly so that we can “fund retirement, healthcare, education, and all of those other things we see as universal rights”.

Unsurprisingly, Clark is critical of the government’s economic agenda. He claims that people are actually poorer since National came to office. While National is incredibly optimistic about their “vision” for New Zealand, Clark believes they have “no real plan” to achieve it.

An often-overlooked issue is inequality. According to an OECD report released in December last year, inequality in New Zealand has grown faster than in any other developed country since the 1980s. With over 300,000 New Zealand children living in relative poverty, it seems ridiculous that the Government is not paying the issue more attention. Clark cites the tax cuts of 2010 as a major factor in the increasing inequality. “Some people in the really top bracket are better off, but most middle New Zealanders are not.” Turei agrees. She believes that “National has a very narrow sense of what economic growth is. The Greens understand the economy through the lens of economic development, and that means investing in people.”

Turei further argues that the government should be creating more green jobs. “There is an enormous global market in renewable and sustainable technology – that is where the globe is moving.”

WE DON’T NEED NO EDUCATION, OR SO WE’RE TOLD…

A typical student would struggle to call National a friend. Following the latest budget, which included cuts to allowance entitlement and higher loan repayment rates, Minister of Finance Bill English quipped that students “should count themselves lucky that they’ve still got interest free loans and get on with it… Get your training finished and get a job and start contributing.”

Woodhouse agrees. While there have been some “nips and tucks to entitlement”, he believes that we still have “one of the most generous tertiary education support networks in the world.”

Obviously Woodhouse has forgotten that tertiary education was free and there was a universal allowance in New Zealand up until 1990, a period in which many of today’s politicians received their education. I wonder how he’d survive on $171 a week of “survival costs” in the high-quality housing of Castle Street.

RED-GREEN TO THE RESCUE!

David Clark, who was Head of Selwyn College before entering Parliament, believes the education cuts are “sending the signal that you are really only going to get to uni if you are wealthy and you have the privilege of having educated parents.”

Labour and the Greens ultimately support universal allowances, although Clark offers the vague caveat “as we can afford it”. The Greens go further, opposing student loans altogether: “People are being forced to pay for what is a public good.”
Not content with slashing tertiary education funding, National have attempted to cut teacher numbers in public schools, arguing it would not affect the quality of education. A red-faced John Key had to eat his words after previously being quoted as saying that he sends his children to private schools because “they have smaller class sizes”.
Turei disagrees with National’s education cuts across the board. She believes that ultimately National “are treating quality education like a privilege… There is an argument for greater public investment in education at every level, because we know it is good for our families and our economy to have a highly educated population.” The cuts and the recent closure of TVNZ 7 make it easy to argue that a highly educated population is not part of National’s “brighter future”.

Prime Minister John Key’s uniquely “low-key” (sorry) personality and his ever-present smile played a large part in National’s rise to power. Edwards argues that “despite being the $55 million man, [Key] was seen as someone who understood everyday people, who was down-to-earth.” Yet National’s current decline is largely attributed to Key’s increasing disconnect with the public. As he tries to hobnob with the Queen and other heads of government, he is starting to appear more like a typically arrogant politician. Edwards believes the public is more impressed by images of him in his shorts having a beer at a barbeque, which says a lot about New Zealand culture as a whole.

But despite all those cringe-worthy moments where Key seems to reinvent the English language with new words like “Troaty”, there are some moments that really make us proud to be New Zealanders. I don’t think any leader in the history of New Zealand has been quite as courageous as Dear John. Sure, David Lange sent the Americans and their nuclear warships packing, but that’s nothing on attempting a three-way handshake in front of millions worldwide after the Rugby World Cup final.

For National, the road to the 2014 elections is not looking too clear. Increasingly divisive issues like asset sales are hurting National’s popularity. John Key’s never-ending smile is beginning to fade, and so too are National’s chances of re-election in 2014.

Law and politics student/tutor Sam McChesney believes that “this National government is basically a placeholder while Labour sorts its shit out. They’ve taken us backwards but not too far backwards, and in 2014 a Robertson- and Cunliffe-led Labour will rise like the phoenix to take the country into a new, enlightened age of social democracy.” Fresher Ally Harper is more blunt: “Obviously John Key doesn’t understand we can’t drink money: frack is wack.”

There has been an obvious change in political mood of late in Aotearoa, and people are starting to realise that John Key’s vision of a brighter future is yet another right-wing delusion. Judging by the increasing amount of political activism, with the student-led “blockade the budget” in Auckland, the ongoing “Save TVNZ 7” campaign, and the growing opposition to “Partial Asset Sales”, there is definitely growing discontent.

From the people I’ve spoken with, I get a sense that the process for change is in good hands. There is no reason why the future can’t be “bright” – we’re just going to need the “John the Visionary” to step aside.
This article first appeared in Issue 15, 2012.
Posted 5:13pm Sunday 8th July 2012 by Michael Neilson.