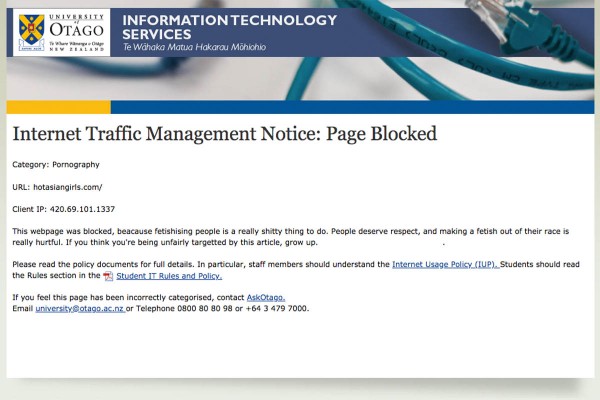 Your Asian Fetish is Gross

When I was younger, I was convinced that no one would ever find me attractive because I’m Asian. I don’t fit into eurocentric beauty standards, and I also don’t fit into Asian beauty standards. I’m dark skinned, little, brown-eyed and have short, wavy hair. I would’ve given anything to be tall, blonde and blue eyed like the girls in Creme magazine.

Fast forward a few years and I was surprised, even delighted, to find out there is a whole subsection of white men who exclusively date Asian women. It wasn’t until I was older that I realised how insidious this actually is.

At the age of 16 I had my first (white, of course) boyfriend. A friend of his told him that he couldn’t wait to “try” Asian. As if Asian women are an exotic flavour of regular women. When I asked my boyfriend why someone would say something like that, he said it was because Asian women are “tighter”. When I hit 18 I started going out on weekends, and was told by several men, unprompted, that they had “yellow fever”. I was also asked by several men if I was Japanese. Confused, I asked one of these (white) men if he was Japanese, and he tried to start a fight. Several men that I talked to told me about their travels to Asia, and how much they loved it. They also told me about their Vietnamese, Chinese, Thai, Japanese, and Filipino ex-girlfriends. When I realised I was bisexual, the first girl I ever dated told me she “loved Asian women” and was very excited to be seeing me. I ghosted her.

Over the years, I developed a sixth sense of who was fetishising me and who was genuinely interested in or attracted to me as a person. My best description of it is that it’s like a primal shudder that moves through my spine whenever a white man starts speaking about his exclusively Asian dating history, or his favourite anime, or how he just “prefers Asians”.

This newfound sense developed from the realisation that what these people found attractive wasn’t me as a person, it was their projection of Asian-ness that they placed on me. I wasn’t seen as a unique individual, I was the Asian girl. I was simply a conduit for the things they found attractive about Asian stereotypes. Asian girls are quiet, they’re submissive, they have smaller vaginas, they’re easy, they’re kinky, they’re hyper-sexual, they’re toys for the white sexuality. And this image of Asian women is so pervasive that it’s grown into its own phenomenon. The Asian Fetish.

Decades of studies have shown that Asian women are among the most fetishised demographic, alongside black men. Sex tourism is a booming business in parts of Asia, where women are regularly exploited for a market made up predominantly by white men. If I had a dollar for every time a white man has hit on me because I’m Asian, I probably would have paid off my student loan by now. And I’m not alone. Almost every single one of my female Asian friends has a story like mine.

Shelly* recalled “being harassed online by a guy saying ‘I love Asian women, they are so exotic and submissive, they would make good wives’”. Shelly found this infuriating, and said “I wanted to punch the fucker”.

Mary* said that “most of the guys I’ve dated seem to exclusively date Asians or weebs” and that she’s “sick” of being told that she is “so interesting looking and exotic”.

“Incredibly, relationships with people who are only keen because of my ethnic makeup never last very long at all. Maybe it’s because I’m actually an interesting person with ideas and passions and thoughts that are not completely based on a fictional idea of what an Asian person is like?” She also said of her Asian mother and Pākehā father’s relationship that, “I think that my dad has proven his racism since the relationship ended… [my mother] was wholly a sexual object originally in his eyes rather than a whole person…. I know he thinks less of Asian people.”

Sandra* dated a ginger boy who said that he felt like Asian girls were more “quirky” and that he was from a “minority” so he connected more with Asian women. She said that his explanation was more nuanced than that but “as Asian women, we are constantly wondering if it’s a fetish. If men (or women) are only into us because we are Asian.”

Hollyn* had an experience with one particular white man who “only ever dated internationals” and “was bragging about how he’d fucked a shit tonne of Asians”, saying how Asian bodies are “more tight” and “petite”. He told her “he wants to dominate them”. Many of her friends had also been harassed by this man as he “[goes around] ... randomly chatting to Asian girls … and he’ll try to speak to us in our language.”

Another friend, Lalita*, said that she knew “people would always choose [white women] as a girlfriend over me” and that she first became aware of the difference between white and Asian female sexuality when a man flashed her on the beach. Her father argued with the flasher, saying Lalita “had grown up in the West and only spoke English so I was ‘pretty much a white person’ so the guy stopped. Not because it was wrong but because I was ‘too white’ to harass. I was 12 at the time.”

This incident caused her to start dreaming of “being a white person” so “I could be pretty and desirable in a nice way, rather than a hyper-sexual way. I felt like if I had been white, people would think more of me.”

These are just a few examples of how Asian women and their sexuality are stigmatised. In my first year of university I was given the nickname ‘promiscuous Asian’ within the first week of being at the residential college. I’d not even slept with a single person, but the very fact that I was an Asian woman was apparently threatening enough that I was targeted. At its best, Asian fetish is reductive and offensive. At its worse, it makes Asian women a target, and a whole community unsafe.

Navigating sexuality as a young woman is hard enough as it is; with the addition of an Asian identity, it becomes a minefield. Guessing my ethnicity is not a pick-up line. Neither is telling me you have “yellow fever”. I don’t care how many Asian girlfriends you’ve had in the past, or what anime you’re into. I’m a person, not your exotic oriental fantasy girl. I also don’t care what you say to justify it. If you are exclusively attracted to Asian people, you need to take a deep, hard look at why. It’s never “just a preference”, or a “respect for the culture”. Nine times out of ten it’s rooted in the way Asian women are presented in the Western World. It’s reductive, insulting, debasing, dehumanising and dangerous. Asian women are more than sex toys. We are not objects to hold power over. We are beautiful for more than our features and valid for more than your sexual exploration, or exploitation. We are people with personalities.

Our sexuality is ours to define, and it’s time to decolonise our fucking love lives already.