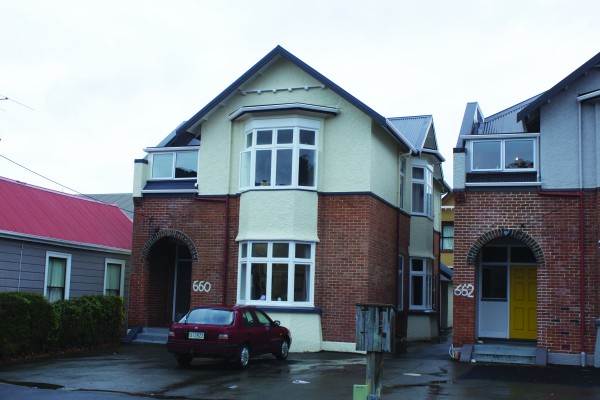 Seven years ago on a rainy Monday morning in Christchurch, I picked up the phone and called Ji Fraser from Six60, to interview him about his band, named after their flat at 660 Castle Street. When I asked him about how he found flatting in Dunedin, he responded diplomatically: “Flats are not that nice to live in but have heaps of character”.

In 2006 Matiu Walters and Ji moved into 660 Castle Street with friends from University College. They had spent time jamming in their rooms and thought it’d be good to flat together and get a band going. Ji bought a cheap PA. Hoani played the bass. They referred to the flat as 660, and as the band formed and they started playing shows, they became known as the 660 boys. When it came to releasing their first EP, they decided to call themselves Six60, after that Castle Street flat, because it was a place that meant so much to them. “That’s where it all began,” Ji said, “it’s where I wrote my first song, it’s where we had our first practice together. It was the beginning of everything.” Like so many other Otago alumni, Ji feels that the experience of flatting has a great impact on students. “It’s really special for a lot of people. So many good times, a lot of bad times too. They’re a rich source of memories.”

This attachment to flats and to a particular time and place is common among students. In her welcome back lecture in February 2016, VC Professor Harlene Hayne referred to the "rich deposit of memories between adolescence and adulthood," and a phenomenon called the "reminiscence bump" that seems to magnify our memories of that time. Of course, we don’t recognise the significance until we’re on the other side of that age range but it strikes me that attachment to flats can be attributed in part to the reminiscence bump.

In March this year Six60 were back in town playing support for Ed Sheeran. All three acts that performed – Mitch James, Six60 and Ed Sheeran – played songs that referred to the importance of place: Mitch’s “Lucid,” Six60’s “Don’t Forget Your Roots,” and Ed’s “Castle on the Hill,” all hark back to places that were important to them at a particular stage in their lives. Ed’s place is Suffolk, Mitch and Six60 both reference Dunedin; the video of “Don’t Forget Your Roots” is, in part, a visual love letter to North Dunedin’s named flats, including 660 Castle Street. https://www.youtube.com/watch?v=vqnwqsJYyiU

And Six60, as they always do when they’re in town, stopped by the old flat for a photo. This place continues to have meaning for them twelve years on.