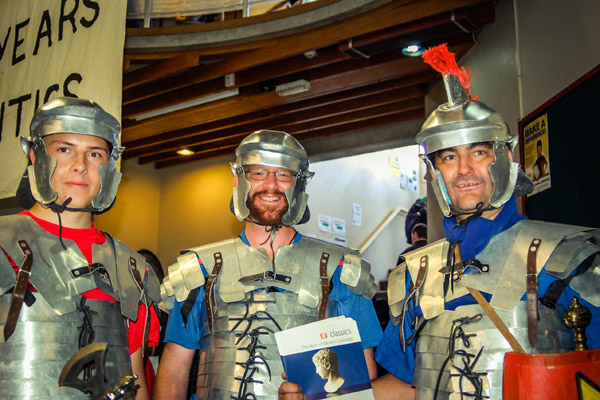 We trawled Facebook trying to find a fun society to visit when we came upon an invite to the Otago University Debating Society opening function, to be held at Monkey Bar of all places. Sold.

The number of people at the event impressed me. By the law of large numbers I knew there had to be some skuxes and in fact a lot of people stood out, giving the impression that “This person is a character”. I later learned that Michael Laws and a new Green MP are old OUDS members.

The OUDS women were generally physically fit and pretty sassy to talk to. I talked to one blonde who other guys were comparing to Margaret Thatcher. Young Iron Ladies: Hotness. Later, the Executive of the debating society crossed the upper floor of Monkey as a sort of introduction ceremony. Olivia and I were in agreement that the male members of the exec were particularly juicy and we found ourselves both similarly fond of the “developing officer”, whatever that is.

The party moved from Monkey Bar to the president of the society’s flat for a keg party. It was actually pretty ruckus and the president of the society did a huge keg stand along with several other members of the society. I began surveying the scene more thoroughly to find an interesting cross-section of people at the debating society in terms of different years and backgrounds. I pashed a loudmouthed second-year just outside the party before heading out to town. I rate OUDS potential highly.

I expected a lot of loudmouthed nerds and obnoxious Young Labs/Acts/Nats/whatever and there were a couple. But definitely still some skux potential. The social rep of the society was friendly and stood out as a skux (I had seen him at pint nights before at Re:Fuel).

Many of the women had a real feminist angle and were very well-spoken but I couldn’t quickly figure out if any of the women there were also into women, which stymied my efforts. The party at Monkey finished as I was exchanging eyes and numbers with a tall American exchange student and I decided to head to town instead of going to the keg party. In short, a pretty skuxable evening. Chur, OUDS.