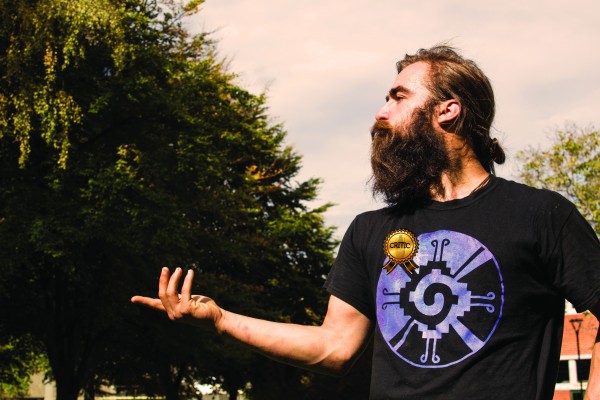 No one person has defined North Dunedin in 2018 more than Josh Smythe. Also known as “Jesus” and “The Messiah,” Josh has been living, breatha-ing, and fire-dancing through these streets for seven years now and has amassed an enormous amount of popularity and political power.

Josh has set himself the target of creating a genuine feeling of culture among the Breathas of Dunedin. He’s a constant and beloved presence on what he calls “the heritage streets” (Castle, Hyde and Leith), at Pint Night and all the big Doofs. He has a way of convincing you that we are all participating in some higher level of community and artistic expression, rather than just getting fucked up on Diesels on a random Wednesday.

But it’s not just his hero status among frothers and drunk second years that makes him the Critic New Zealander of the Year. As OUSA Re-Creation Officer (a title he invented himself because recreation isn’t interesting enough), he has been a polarising but undeniably influential Exec member.

He’s approached student politics in a different way, often frustrating fellow Exec members who felt he wasn’t pulling his weight in terms of administrative duties. But he showed an ability to tap into the emotions of the student body and harness them tactfully. His Proctor Protest was the biggest student protest of this millennium, drawing a crowd of somewhere between 600 and 800 protestors, yet still very controlled and peaceful.

He also pulled the most badass Frank Underwood power move student politics has seen in years. In a very heated meeting, the Exec voted against supporting the Proctor Protest, didn’t accept Josh’s quarterly report, and then threatened to move a vote of no confidence in him if he didn’t apologise for speaking to the media without permission from OUSA and calling for Dave Scott to resign. Josh immediately left the meeting and sent emails to every Exec member saying that if they voted no confidence in him, he would take it to a Student General meeting and move a motion of no confidence in everyone who voted against him. To prove his point, he rallied 150 students to show up at the next Exec meeting, where in the face of the crowd, the Exec backed down and reversed its position on the protest.

Josh admits that he broke rules by speaking to the media without the permission of the President, and the Exec’s complaints about his work may well be valid. But the pure political theatre of the moment made it easily the most fun Critic has ever had at an OUSA meeting.

With his incredible beard, mind-blowing bird whistles, chill buzzy yoga, and status as the most recognisable student on campus, Josh Smythe is the Critic New Zealander of the Year for 2018.

Charlie from Radio One

Charlie the Spoodle from Radio One has become a social media superstar, the face of Dunedin’s alternative music scene, and the unexpected face of an OUSA Presidential Campaign. Charlie represented the ‘No Confidence’ category and picked up 267 votes thanks to a guerrilla posters campaign called ‘Vote Dog The OUSA R Shit!’

Charlie was also the inspiration for the Critic GoodBoy issue and she met Jacinda Ardern.

In his desperate attempts to seem relevant and/or cool and/or popular, David Seymour has been the clear highlight of politics in 2018. He put on tighter and tighter pants, all in vain, described himself to Critic as a symbol for awkward sex, and just ran a bunch of events where he tried to get students to go the pub with him. It’s unclear whether he wants voters or just needs friends.