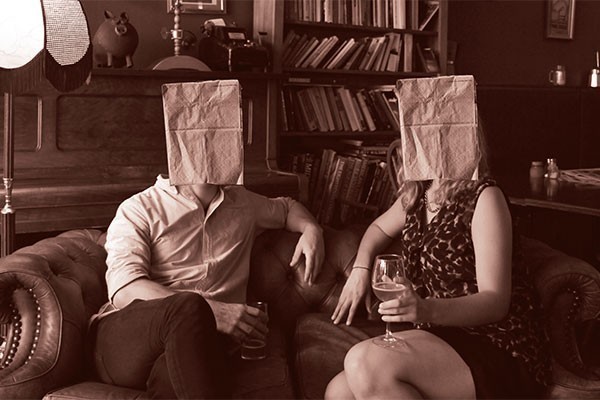 After a shower with the water pressure of a wet sigh and slapping on my least stained shirt, I was rushed to the Dog with Two Tails. On entry to the restaurant the gal had arrived and was on the iPhone at arrival and I find it safe to assume she was on the swipe. I say this as it came more relevant throughout the evening this lady was out to get some.

After the classic first half hour sharns necessary for all first meetings, conversation started flowing, as did the wine. Picked entirely by the bar staff, the classic calls on the acetic, smoothness and age of the harvest of the wine spilled from my mouth with such conviction that even I believed I knew what I was talking about. She seemed like a nice enough girl, with the classic part-nerd, part-alco, part-jafe found in many girls, yet dear god, I did not realise the extent of the third fractioned attribute until later in the night. What at first seemed like a wise idea to remove food from the equation and splash out on more wine, soon turned to a hectically drunk me and a seemingly tipsy date.

The idea of bringing her home was on the mind, but the realisation that there were 13 other men staying in my 6 man flat seemed a deterrent. Yet as the music got loud, my senses got dimmed, and on our way we were.

What went from a seemingly shy clever girl quickly turned into a vulgar lass who managed to utter some phrases I have not heard in the entirety of my experiences with foul mouths. Maybe it was the loud jazz muffling her words, but I swear this was not the same person I had met initially, with dinner I had met her Jekyl and here came her Hyde. On arrival to the flat, things got far too out of hand that I must not go into detail for consequences of retribution, but she managed to both insult and entertain everyone, a feat I hadn’t ever seen before. Seeing the full participants of the premise low key ripping on this entity, I tried to shoo her from the premise, but she would not relent.

To say this was an interesting experience is a little bit of an understatement… I arrived a little early and sat down waiting for my date, halfway hoping he would stand me up so I could drain the bar tab dry and half hoping this turned out to be good experience. But he did arrive and he turned out to be quite cute which was a little unexpected. He also turned out to be quite a cool guy and amid him sending texts to my friends and me answering his phone for him we were having a great time.

Conversation flowed really well and two bottles of wine later I found myself drunkenly standing up and agreeing to something called pineapple or his place? To be fair my memory gets a little fuzzy at this point. Anyway we end up at his house and I suppose you could say things took a natural progression.

I must say though as great as he was the highlight of the night was definitely his flatmates who ‘pretended’ to help me find my dress whilst showing me the ‘goods’. I don’t think I’ve ever seen that many half naked guys before, but in all seriousness one of his flatmates was pretty great and helped me with directions home while two others both simultaneously showed me their ass and everything else.

So to recap I am minus one dress and a pair of flats although I did gain a pair of shorts! So thanks Critic for the interesting night- it was definitely one to remember!

P.S. In all seriousness though can I get my dress back?